Highlights from some of my favorite bloggers’ reactions to the news that we won the election:

Jeremiah Moss, from Jeremiah’s Vanishing New York (my favorite anti-gentrification blog), has a great account of the spontaneous parades that could be heard roaming below 14th street until 3 am on the 5th. He was at Union Square for the sing-along I posted a video of the other day. From his post, composed around 2:30 in the morning:

In the streets of New York, crowds are still cheering, shouting “Yes, we can!”
Cars honk their horns. People bang pots and pans. They cannot stop.
Don’t want to stop. When the announcement came over the television that
he had been elected, cheers erupted from the streets. A crowd gathered
on 8th Street and 1st Avenue, taking over the intersection. Police
pushed them back here and there, but otherwise left the celebration
alone.

People in cars stopped and the crowd rushed to shake their hands and kiss them through open windows.

Garbage men riding the backs of honking trucks waved and pumped their fists.

City bus drivers honked and slowed down so passengers could stick their hands from the windows and high-five the people on the street. 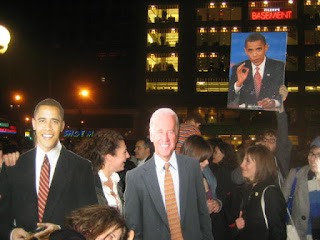 At Union Square, the park was packed. People climbed lamp posts and hoisted flags atop. We sang God Bless America. We chanted “U-S-A” and “Yes, We Can” and “O-Ba-Ma!” Strangers hugged and kissed strangers.

The
celebration went on and on, a wave that rose and fell, then rose again,
for hours and hours. Down side streets and avenues, in pockets of
jubilant people.

For Jeremiah’s photos of the night — a fantastic set of images — click here.

Alex at Flaming Pablum (which has its own recurring feature on NYC’s Vanishing Downtown) has my favorite rubbing-it-in image:

Alex also has one of my favorite Obama/pop culture mashups as part of his GOTV post:

(Sidenote: As his penchant for Bowie imagery would suggest, Alex is a serious 70s rock aficionado, with a specialty in the NYC downtown scene. If you wander over to his site, don’t miss his series of posts on NYC in rock videos and on album covers. I thought I’d throw that in since I know some of our readers share similar tastes.)

Gowanus Lounge collects accounts and photos of Obama celebrations in Brooklyn; Gothamist reports on arrests from one such street party in Williamsburg. (h/t to Jeremiah for the last two.)

Meanwhile, our friend MaNNaHaTTaMaMMa posts on intergenerational euphoria spilling over into other areas of life.

Are there other accounts from NYC blogs you think we should know about?