Apologies for the slow posting lately: Cyrus is on the road this week, at the Modern Language Association among other destinations, and I’m up to my neck in an initial screening of over 550 applications to our Ph.D. program. So much for winter “break.”

I’ve been mulling over a list of my favorite NYC-related books of the last year and realized many of them shared something in common: they sit on my nightstand or in my office unfinished! This isn’t the fault of any of them — it’s a sad byproduct of reading so much for my day job. As usual, I’m trying to read too many things at once. And I’m sure I’ll eventually get through them — some of them in the next few weeks before classes start. 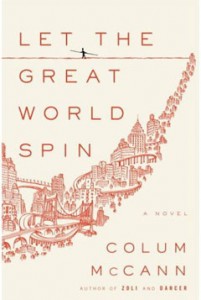 It’s driving me nuts that I don’t have more time just to buckle down and finish this: there’s good reason it’s on so many year-end lists. I’m a little over half way though. Its episodic structure, relying on multiple narrators, lends itself to slow-going, though: I can finish off one narrator and then wait a few weeks before taking up the next one. You’re probably familiar with the basics: McCann uses Philippe Petit’s famous tightwire walk between the WTC towers as a unifying device in his portrait of a cross-section of New Yorkers. His genius, much like that of the documentary Man on Wire, is pulling off a post-9/11 work that’s set in 1974: this is, we’re to understand, one version — or many versions — of the world that made us. Previously. And. 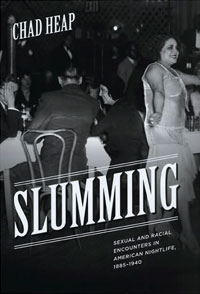 Heap, who teaches American Studies at The George Washington University, writes beautifully — without sacrificing historical argument and interpretation — about the forces that shaped, and the consequences that flowed from, a turn-of-the-century craze among upper classes to visit LES low-life, bohemian, Harlem, and gay/lesbian underworlds in New York and Chicago. How did slumming organize social space a century ago? How did it help to produce divisions of race, class, and sexuality that remain in place today? Give me a couple weeks and maybe I’ll have some better answers. Previously. 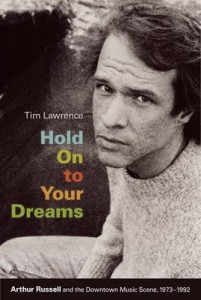 Hold On to Your Dreams: Arthur Russell and the Downtown Scene, 1973-1992 by Tim Lawrence.

I haven’t yet got out of the 70s in this one, but damn — what a loving portrait, and rich with biographical detail and cultural insight alike. I’ve sung undying praises for Russell before, but if you’re a fan of popular music and you’ve somehow made it to this point in the century without having purchased this album or seen this film, shame on you! Once you’ve taken those in, you’ll be heading to the bookshop to pick up Lawrence’s bio. Russell has been and will certainly be a key to the rewriting of the downtown scene’s history — one that takes in all its multiple incarnations, from underground disco to minimalism to NY art punk.