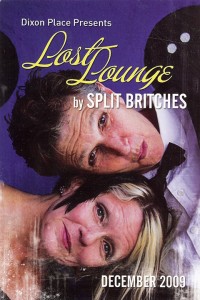 One of the theater troupes featured in “Staging Lesbian and Gay New York,” Robin Bernstein’s contribution to our forthcoming Cambridge Companion to the Literature of New York City, is Split Britches. Bernstein recounts how Lois Weaver, a non-Native member of the Native American company Spiderwoman Theater, “fell in love with Peggy Shaw, a butch lesbian member of [the troupe] Hot Peaches.” According to Bernstein:

Shaw left Hot Peaches to join Spiderwoman for Cabaret: An Evening of Disgusting Songs and Pukey Images 16 (1979), but soon Shaw and Weaver both left Spiderwoman to strike out on their own. The ensuing personal and professional partnership between Shaw and Weaver became one of the most fecund in New York