A cautionary note on “tolerance” in New Amsterdam 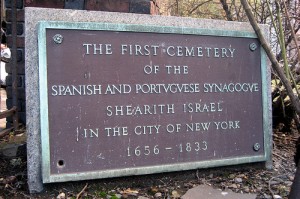 In this morning’s lecture about the “problem” of Dutch New York, Cyrus showed a clip from Ric Burns’ New York that recounted the story of 23 Sephardic Jews who came from Brazil to New Amsterdam seeking asylum from the Spanish Inquisition. At the close of the clip he warned students to pay attention to the triumphalist music (he called it “manipulative”) that had accompanied the anecdote’s conclusion, in which the anti-Semitic Stuyvesant is overruled by the Dutch West India Company and told to uphold freedom of religion and what would become New York’s general celebration of cultural diversity.

Here’s how the popular historian Russell Shorto glosses this incident in his The Island at the Center of the World:

In 1654 twenthy-three Jews, some of whom had fled the fall of Dutch Brazil, showed up seeking asylum. You can almost see Stuyvesant shaking his head at being told that, on top of the usual heap of issues he had to deal with, he now had a Jewish population. His reaction was matter-of-fact, and perfectly in character: the Jews were “a deceitful race” that would “infect” the colony if he didn’t stop them. He barred one from buying land, “for important reasons.” He even refused to allow them to take turns standing guard with the citizens’ militia citing “the aversion and disaffection of this militia to be fellow soldiers of the aforesaid [Jewish] nation.” If they didn’t like it, he told Jacob Barsimon and Asser Levy, “consent is hereby given to them to depart whenever and wherever it may please them.” But Abraham de Lucena and Salvador Dandrada, leaders of the Jews, knew their rights in the Dutch system, and appealed to the Dutch Republic. The Jewish community of Amsterdam applied pressure in the time-honored tradition of politics, and won. Stuyvesant’s superiors reminded him loftily of the “each person shall remain free in his religion” law (and added that certain influential Jews had invested a “large amount of capital” in the West India Company), and ordered him to back off.

It’s a story of cosmopolitanism and capitalism working hand in hand, consistent with Shorto’s line on New Amsterdam and with Burns’ throughout his documentary. New York, they tell us repeatedly, is an experiment in which all the peoples of the world come together in the name of making money.

Sort of. The rosy tone of these histories is belied by the very geography of Manhattan’s oldest Jewish historical sites, especially the cemetery of the Congregation Shearith Israel, featured in the Burns clip.

The cemetery, located on St. James Place in lower Manhattan, north of the Brooklyn Bridge and just off Chatham Square in Chinatown, is the oldest remaining Jewish cemetery in the city. There seems to have been one older, now lost: this cemetery dates to the 1680s, but the first extant mention of a Jewish burial place in the city dates to 1656, describing the plot as “a little hook of land situated outside of this city.” The latter part of the phrase is telling, as is the site of the burial ground on St. James Place. These cemeteries were, in fact, out of town. 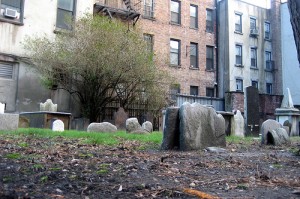 The Shearith Israel Cemetery on St. James Place would have been well outside the boundaries of the city when it was established. It’s well outside the actual wall on Wall Street. (By contrast, think of the location of Trinity Church and its cemetery.) It’s closer to what was known as the Collect Pond, a swamp in the area that eventually became the Five Points. The Pond was notorious as a place of public execution, including the burning of several blacks and whites accused of fomenting a slave rebellion in 1741, the event that the historian Jill Lepore writes about in her terrific book New York Burning. In other words, Dutch tolerance only went so far, or perhaps we should say it kept its distance.

You’ll find a nice account of Congregation Shearith Israel and subsequent Jewish burial places here. Kevin Walsh’s treasure-trove of a website, Forgotten New York, has a good page, too, which includes a terrific tidbit about a building abutting the cemetery on St. James, related to the origin of the phrase “I heard it through the Grapevine.” (Check it out!) Finally, I love the account provided on the blog Knickerbocker Village, which abounds with local knowledge about the neighborhood surrounding the old cemetery. David Bellel, KV’s author, contextualizes the cemetery’s story in an account of nineteenth-century corpses on the move, as New York’s governmental officials reduced the sizes of — or eliminated entirely — several graveyards in lower Manhattan by exporting bodies uptown or to outer boroughs. The “First Cemetery,” as the Jewish burial ground was known, originally covered several acres, extending from the Bowery to the East River. Jewish leaders refused to remove it entirely, hence preserving the little plot still on St. James, where eighteen Jewish veterans of the Revolutionary War still remain buried. Find the rest of his account here and check out his other posts on the burial ground here.