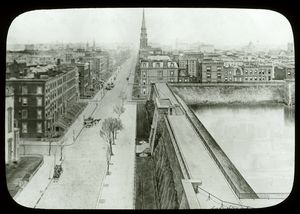 I’m reading our colleague E. L. Doctorow’s 1994 novel The Waterworks in preparation for a planned post about his most recent novel, Homer & Langley.

For today, I thought I’d share a wonderful little passage about a now-lost piece of New York. Indeed, it’s lost even by the time that the novel’s narrator begins his retrospective narration.

This passage occurs as the narrator is talking about a possibly supernatural event that may have taken place on 42nd Street in the shadow of the Croton Reservoir.

I’ll tell you here that I was ready to believe in every dark vision if it appeared at the Croton Holding Reservoir. Which is gone, of course. Our public library stands there now. But in those years its massive ivy-covered walls rose over a neighborhood monumental in its silence …. The few brownstone and marble mansions across the street along Fifth A venue stood aloof from the noisy commerce to the south. Our Mr. Tweed lived just a block north, practicing the same silence. It was an unnatural thing, the reservoir. The bouldered retaining walls were twenty-five feet thick and rose forty-four feet in an inward-leaning slant. The design was Egyptian. The corners were relieved by trapezoidal turrets, and bisecting each long wall face were temple doors. You went in, climbed up a stair to the parapet, and came out in the sky. From this elevation the rising city seemed to fall back before something that wasn’t a city, a squared expanse of black water that was in fact the geometrical absence of a city.

I grant you that it is a very personal feeling I had. New Yorkers loved their reservoir. They strolled along the parapet arm in arm and were soothed in their spirits. If they wanted a breeze in summer, here is where it would blow. Puffs rippled the water. Children launched their toy sloops. The Central Park, well to the north, was not yet finished, all mud holes and ditches and berms of shoveled earth, a park only in the eyes of its imaginers. So this was the closest we could come to pastoral.

But I am sensitive to architecture. It can inadvertently express the monstrousness of culture. As the complicit expression of the ideals of organized human life it can call forth horror. And then something happens appropriate to it, and maybe from its malign influence …. [Ellipses in original.]

To find out why our narrator has that peculiar “personal feeling” about the reservoir, take a look at chapter nine of the novel.

The picture above is from the digital archives of the New York Public Library. The NYPL caption reads: “Croton reservoir : Fifth Avenue in 1879, looking south.” The view below shows the reservoir “looking west at street level.” 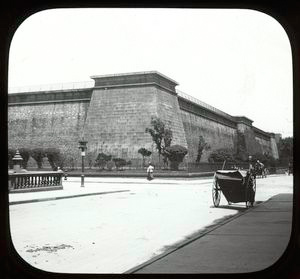 Click on either picture to get to its NYPL page, which will allow you to see an enlarged image.