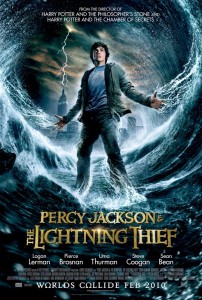 Best use of New York as a setting in the new film Percy Jackson and the Olympians: The Lightning Thief?

For my money, it’s not the Empire State Building. Nope: it’s the water towers.

[The poster above, which shows the Empire State Building but also invokes the scene to which I’m referring, is the official UK poster. Note the title at the top: “Harry Potter and the Philosopher’s Stone.”]