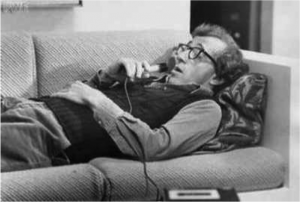 Yesterday, I began my lecture for Writing New York by revisiting a scene from Woody Allen’s Manhattan that I’d discussed briefly during the previous lecture. It’s near the end of the film, when the film’s protagonist, Isaac, is engaging in some self-therapy on his couch, free-associating about the things that make life worth living.

What he comes up with is a list of random cultural associations that reassure him of his place in New York’s hierarchy of culture and society (and invoke some of Woody Allen’s influences) — at least until the last one, which is meant to seem like a revelation. The scene takes place in silence, until Isaac thinks of his seventeen-year-old ex-girlfriend Tracy, at which point — cue the Gershwin music.

Well, all right, why is life worth living?
That’s a very good question.
Well, there are certain things, I guess, that make it worthwhile.
Like what?
OK… for me…
Ooh, I would say Groucho Marx, to name one thing.
And Willie Mays.
And… the second movement of the Jupiter Symphony.
And… Louis Armstrong’s recording of Potato Head Blues.
Swedish movies, naturally.
Sentimental Education by Flaubert.
Marlon Brando, Frank Sinatra.
Those incredible apples and pears by Cezanne.
The crabs at Sam Wo’s.
Tracy’s face.

As I went over the list with the class, I asked them what they thought “Swedish movies, naturally” was supposed to signify. Someone volunteered: Ingmar Bergman. Quite possibly, I replied, though something about the way he says it makes me think that it’s less Bergman and more I Am Curious (Yellow) (1967). Nobody knew what I was talking about.

I guess none of them had read the school newspaper the previous day. The Washington Square News ran a piece with the headline, “Sexy Swedish Filim at FSLC,” in which it noted that “those interested in exploring sexy Swedish cinema should make a pilgrimage to the legendary 1967 ‘I Am Curous (Yellow),’ a little movie that enraged critics worldwide and eventually made it to an obscenity trial at the Supreme Court.”

The article was describing the film series “Northern Exposures,” currently playing at Lincoln Center through May 4. I Am Curious (Yellow) will be shown again at 7:20 p.m. on Friday, April 30.

And, yes, there are several Bergman films showing as well.