History of hip in black and white (redux) 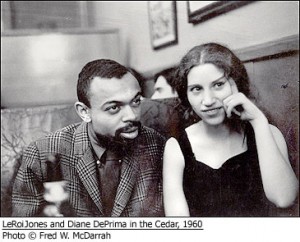 In response to yesterday’s post about the Beats and racial performance/identification, I received an email from a reader asking about LeRoi Jones/Amiri Baraka, obviously the most crucial contact point between Beat culture and black consciousness. It may be worth noting a couple arguments recent scholars have made about Jones/Baraka and his relation to Village scenes in the 50s. First, Komozi Woodard has argued that Jones/Baraka’s movement toward black nationalism came via a shared set of values with other Beat poets, a “romantic rejection of the conformities of bureaucratic society.” Also, William Lawlor’s entry on Baraka in Beat Culture: Lifestyles, Icons, and Impact emphasizes the cross-racial relations in Jones’s personal life (his marriage to and children with Hettie Cohen), his poetic production (friendship with Ginsberg and company), and his publishing (he edited the mimeographed poetry newsletter Floating Bear with Diane di Prima).

A less individualized approach to the question of black and white cultural blending in the 50s comes from W. T. Lhamon’s history of the birth of cool, Deliberate Speed. (I’ve cited Lhamon’s work before, in my lecture on The Jazz Singer and blackface.) Lhamon locates cross-racial cultural formation in the broadest arcs of U.S. history in the 50s:

Why was the mid-fifties the precise moment when black culture should have become an apt symbol for the way millions of nonblacks wanted to be in the world? Within the United States, black culture had long determined much of Southern Culture, from cuisine to consciousness, gumbo to guilt, but it went national at mid-decade, crossed the Mason-Dixon line, jammed airwaves and stores and headlines, heavily influenced American literary form and styles, commanded the attention of the Supreme Court, and involved itself with aspects of every extant form of art. But why did people start acknowledging their vernacular cultural resources at this moment? Maybe when Holocausts and Hiroshimas, genocide and fallout, new technologies and demographic shifts all threatened the population, then even mainstream people began more frequently than usual to see themselves as dupes of their inherited ways of being in the world.

Then they wanted to change those duping patterns. Seeing themselves as victims, they turned to that black part of the nation and thus of themselves which had longest borne and coped with victimization. In fact, mostly unaware but all across America, whites had absorbed Negro culture long before the fifties. Music and sculpture and dance, speech and writing and lore, religion and food and costume — black life had touched every corner of American life, had long been a part of white life. The paradox that had propped up the shabby house of American racism, however, was the pre-fifties tenet that such ethnic cultures were somehow separable. This fiction was one of the most victimizing beliefs for Americans of all races. Belief in separability kept the largest two American racial cultures touching while allowing whites their fantasy of distance. It inhibited the powerful even from contemplating any aspect of the black ethic, because by definition they were not allowed to recognize it.

On this model, then, which seems fundamentally compatible with the theory of cosmopolitan contamination put forward by Kwame Anthony Appiah among others,