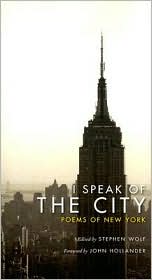 By way of a longer post observing National Poetry Month, I thought I’d point readers to a couple anthologies of NYC-related verse. I’m linking to Amazon, but wouldn’t it be nicer of you to ask for these titles at your neighborhood bookstore?

The most obvious recent anthology, perhaps, is I Speak of the City: Poems of New York, edited by Stephen Wolf and John Hollander and published by Columbia University Press in 2007. It has quite a range, from the 17th-century Dutch poet Jacob Steendam to Tuli Kupferberg’s “Greenwich Village of My Dreams” to work by half a dozen poets who were under 40 when the book came out. These are “poems of New York” rather than poems by New York poets, if you’re splitting hairs. The entries explicitly take the city as their topic and affirm, as the authors suggest in their introduction, the Whitmanian idea that the city itself is a great poem. (For another collection in this vein, see Poems of New York, the Everyman’s Library Pocket Poets volume edited by Elizabeth Schmidt and released in 2002.) 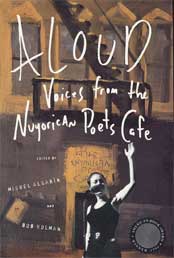 Another title to suggest, and one we’ve used in past versions of our Writing New York course, is Miguel Algarin and Bob Holman’s Aloud: Voices from the Nuyorican Poet’s Cafe (Holt, 1994). The legacy of one of the city’s multi-faceted downtown scenes of the early 1970s, the Nuyorican Poet’s Cafe has always done more than just poetry — in addition to its ongoing slams, it also features film events, a theater program, and jazz and hip hop — all ways of pushing poetry’s limits. The anthology includes work from 1990s then works back to “founding” poems from the movement’s 70s origins, and also includes work drawn from “The Open Room,” the ongoing weekly open mic session in which “poetry in all stages of gestation” finds an audience. As Algarin’s introduction makes clear in its moving evocation of the poet Miguel Pi