Observing the Changes on MacDougal 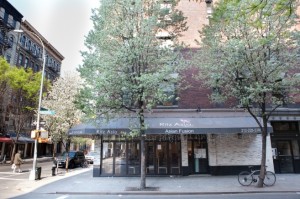 This week ‘s topic in Writing New York is “Downtown Scenes from the Beats to the Punks.” On Monday, Bryan lectured on the Village folk scene, Bob Dylan, and the emergence of Lou Reed and the Velvet Underground. Today, he’s tracing the lines of continuity between beat culture and the rise of the East Village punk scene in the 1970s.

As luck would have it, today’s New York Observer has an article on the changes that have taken place on MacDougal Street since Dylan’s day. The piece is called “The Street Where You Live: The Times, They Have Changed” and features a slide show that mentions some of the writer, musicians, and artists who figure prominently in this week’s lectures and in Bryan’s earlier lecture on Ginsberg’s Howl: