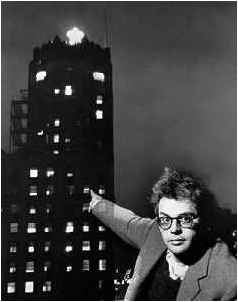 This morning in lecture I mentioned that I’d be posting links to some additional discussion relevant to our discussion of Ginsberg’s Howl and its multiple cultural contexts. Though most of the lecture was devoted to situating Ginsberg, following Ric Burns, who followed Marshall Berman, within the Jacobs/Moses melodrama on the theme of “urban renewal,” I also wanted to spend a little more time tracing connections from Howl back to some earlier material from the course: The Jazz Singer in particular. There’s a melodrama of assimilation/alienation that runs alongside the tension between Moses’ modern city and Jacobs’ defense of traditional neighborhood life that relates to what Diana Trilling famously identified as Ginsberg’s self-deprecating ethnic humor. Here are a couple paragraphs from Trilling’s account of Ginsberg’s reading at Columbia University in 1959, which her husband, the famous critic Lionel Trilling and Ginsberg’s former teacher, along with several other Columbia English department members, refused to attend:

How different it might have been for Ginsberg and his friends if they had come of age ten or fifteen years sooner was one of the particular sadnesses of the other evening . . . as the poets read their poems, whose chief virtue, it seemed to me, was their