Into the Deep with Ric Burns 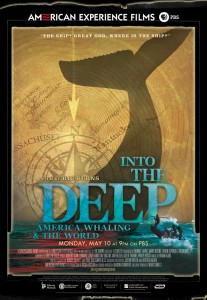 Last night I attended a preview of the latest documentary by filmmaker Ric Burns, whose eight-part series New York: A Documentary Film has been an important part of Bryan’s and my Writing New York course from the beginning. Ric’s latest effort treats another subject that is dear to my heart — Moby-Dick — as it offers an account of the American whaling industry from its origins to its heyday in the mid-nineteenth century.

The film is called Into the Deep: America, Whaling & the World, and it’ll be broadcast this Monday, May 10 at 9:00 p.m. on PBS stations as part of the “American Experience” series. You can learn more about the film by visiting its page on the PBS website and by reading this press release. The website is itself an excellent education resource, with a photo gallery, historical timeline, and bibliography.

I had the opportunity to serve as a consultant for the film, and it was great fun to take a peek behind the scenes and observe some of the craft that goes into the making of a documentary like this one. (Alas, my interview material ended up on the cutting room floor!)

The film tells three stories: the rise and fall of American whaling; the tragic story of the Essex, which was one of the inspirations for Moby-Dick; and the story of how Melville came to write his novel. At last night’s preview, which was held at the American Museum of Natural History, Ric showed three brief excerpts: an introductory section, a longer section on the heyday of whaling, and a bit of the story of the Essex. The film is done in the trademark style that will be familiar to viewers of New York, and the portions I saw featured dramatic, swirling shots of a recreation of the Essex under full sail. We didn’t see any of the film’s dramatizations of scenes from Moby-Dick, so I’m keeping my fingers crossed about those.

What the film tells is the story of American whaling, which means that it doesn’t do much with the state of contemporary whaling today. As Ric pointed out last night, when America was part of the industry, the country dominated it: of 900 whaleships afloat in the mid-nineteenth century, more than 700 were from the United States. Melville’s novel, ultimately, captures American whaling at its peak. Very soon after its publication, changing economic conditions and technologies would strip much of the romanticism from whaling and ultimately bring about the end of the industry in this country.

Ultimately, though, at least in the last draft I saw of the script, the film does have implications for environmentalists today: it tells a cautionary tale of what it means to rely economically on a perishable resource. I’ll post again about the film after I’ve seen it in its entirety.