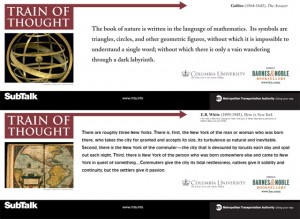 Our friend and colleague Jane Tylus asked Bryan and me to suggest a few quotes about New York history for the MTA‘s “Train of Thought” subway sign program, the successor to the “Poetry in Motion” program. Clyde Haberman wrote about the program in the New York Times last fall. For this round of quotation collecting, Jane was particularly interested in the fields of science and history. We sent her these, but if any of you have other suggestions, we’d love to hear them. Fifty words or fewer.

New York is a great place — a mighty world in itself. Strangers who come here for the first time in their lives, spend week after week, and yet find that there are still hundreds of wonders and surprlses, and (to them) oddities, which they have not had a chance of examining. Here are people of all classes and stages of rank — from all countries on the globe — engaged in all the varieties of avocations–of every grade, every hue of ignorance and learning, morality and vice, wealth and want, fashion and coarseness, breeding and brutality, elevation and degradation, impudence and modesty.

New York, as you knew it, was a mere corner of the present huge city, and that corner is all changed, pulled to pieces, burnt down and rebuilt–all but our little native nest in William Street, which still retains some of its old features; though those are daily altering. I can hardly realize that within my term of life, this great crowded metropolis, so full of life[,] bustle, noise, shew and splendour, was a quiet little City of some fifty or sixty thousand inhabitants. It is really now one of the most rucketing cities in the world and reminds me of one of the great European cities (Frankfort for instance) in the time of an annual fair — Here it is a Fair almost all year round.

— Washington Irving in a letter to his sister, 1847

New York, both by its geographical and commercial position was fortunately prevented from becoming like Boston, merely the metropolis of a locality, a provincial capital; it was broadly seated on the main-traveled roads, and must be national or nothing. All these characteristics made New York the possible, but not the actual, American metropolis. In order to be actually metropolitan, it must not only reflect large national tendencies, but it must sum them up and transform them. It must not only mirror typical American ways of thought and action, but it must anticipate, define and realize national ideals. A genuine metropolis must be, that is, both a concentrated and selected expression of the national life.

According to present indications, New York is approaching this conception of metropolitan excellence …