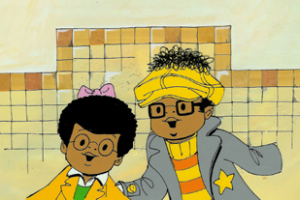 This morning, while watching some old school Sesame Street with my kid, we came across a sketch I’d completely forgotten about — but one I absolutely loved growing up. It’s something like a blend of Encyclopedia Brown and Fat Albert, with a soundtrack reminiscent of Shaft. The segments were part of Sesame Street‘s long and laudable tradition of urban-positive programming and also, probably, one of the reasons the old school Sesame Street DVDs come with a warning that the content “may not be suitable to the needs of today’s children,” or something like that. (The assumption is that black kids in the city don’t need to see positive images of themselves?) Personally, I think the sketch still rocks. I also like Roosevelt Franklin, though, so I may not be an impartial judge.

According to the Muppet Wiki,

[t]he characters of Billy Jo and Smart Susie originated in a series of children’s books by [African American writer] John Shearer, with illustrations by his father Ted Shearer. The series debuted with Billy Jo Jive, Super Private Eye: The Case of the Missing Ten Speed Bike in 1976. When the sequel The Case of the Sneaker Snatcher was published in 1977, the cover boldly advertised “Don’t miss Billy Jo Jive and Susie Sunset on Sesame Street!”

Muppet Wiki also has a rundown on individual episodes, airing between 1978 and the early 90s. Here’s “The Case of the Missing Wig,” which is what we watched this morning: