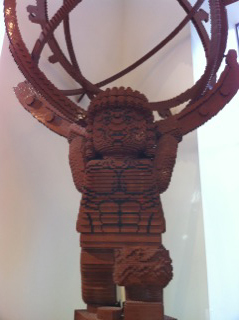 MaNNaHaTTaMaMMa was on hand for the grand opening of the Lego Store at Rockefeller center yesterday. Among its delights are recreations in Lego of Rockefeller Center and two of its talismanic statues: the Atlas (above) and Prometheus. Take a look at her post “Mecca, Now Open in Rockefeller Center.”

Fans of either Lego or the television series Matt Groening and David X. Cohen’s animated series Futurama, which began its sixth season on Comedy Central last Thursday, might enjoy looking at Pepa Quin’s rendition of New New York City in Lego. Take a look at this article on Gizmodo.com.