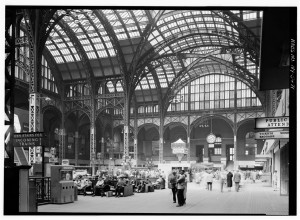 Bryan and I began our third seminar for NYU’s Faculty Resource Network, which sponsors a variety of week-long programs each summer for faculty from affiliated colleges around the country. The subject of our seminar this year is “Lost New York“:

Has New York always been a lost city? On the heels of the 400th anniversary of Henry Hudson’s voyage for the Dutch and the 200th anniversary of Washington Irving’s legendary reimagining of this New World encounter in his Knickerbocker’s History of New York, this seminar will explore the dynamics of creativity and destruction, nostalgia and invention, that have for centuries marked efforts to represent life in New York City. Readings and discussions will address the relationships between the literary imagination and the archives, between migrations and displacements, between loss and remembrance, and between preservation and development in the long and storied history of one of the world’s greatest cities. We will focus our analysis on two famous cultural moments in the city’s history — Greenwich Village Bohemia and the Harlem Renaissance — and explore the ways in which our approaches to uncovering forgotten urban pasts might serve as a methodological foundation for the exploration of urban modernity more generally.

In the end, we decided to cut back on the reading we planned for the course, making it less literary and more interdisciplinary. We’re featuring three guests: David Freeland, the author of Automats, Taxi Dances, and Vaudeville: Excavating Manhattan’s Lost Places of Leisure; the documentary filmmaker Ric Burns; and the architectural preservationist and Brooklyn maven Ward Dennis.

Our group includes literary scholars, librarians, architects, historians, and a scholar of immigration and public health. During our morning session, we used NYU’s Founders Hall and the old Penn Station to open a discussion of the dynamics of creation and destruction, nostalgia and counter-nostalgia, and the politics of preservation. We showed an excerpt from the seventh chapter Burns’s New York documentary (which we will be showing in its entirety on Wednesday morning in preparation for his visit) and then two scenes from the second episode of the third season of Mad Men, in which Don Draper’s ad agency (on the wrong side of history once again) proposes to represent the Mdison Square Garden Corporation, which is bent on tearing down Penn Station.

The afternoon presented a case study in the loss and recovery of a figure from New York’s downtown scene, the avant-garde cellist and pop musician Arthur Russell. We showed the biopic Wild Combination and afterward Bryan contextualized Russell’s work by linking it not only to the downtown music scene and Allen Ginsberg, but also to Frank O’Hara and his successors. My favorite insight of the day came from seminar member Alma Vinyard, chair of the English Department at Atlanta Clark University: that O’Hara’s poem “The Day Lady Died,” which recounts the poet’s activities on the day that Billie Holiday passed away, might appeal to today’s college readers because it resembles a Twitter feed!

Tomorrow we’ll be talking with Freeland and joining him in the afternoon for a walking tour of Harlem. Stay tuned.