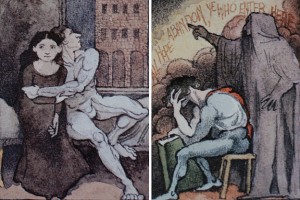 This week in my graduate seminar on the American novel to 1855, we discussed Melville’s 1852 novel Pierre, which was almost universally reviled on its publication and still remains the subject of much debate about its artistic flaws and merits. Most contemporary critics recognize it as some sort of masterpiece, though exactly which kind and exactly what the novel is trying to do remain somewhat open. I find it maddening in many ways, but a challenge too — and hey, it’s Melville, and it doesn’t get better than that, so I keep coming back to it.

Pierre tells the story of an almost cartoonish young man from the Massachusetts countryside — a setting portrayed by Melville almost as some sort of proto-Loony Tunes, Grieg-soundtracked acid trip — who makes his way to New York with a dark and sexy woman he presents as his wife and who may or may not be his half sister by an adulterous affair his father possibly had with a refugee from the French Revolution. Melville’s descriptions of the city in the latter part of the novel are phenomenal: the motley crew that populates the city watch-house, the hordes of promenaders on Broadway, curious old men, hard of hearing, hawking periodicals in newsstands.

Our colleague Tom Augst includes a thorough treatment of the novel’s turn toward the urban gothic in his essay on Melville in our Cambridge Companion; I recommend his essay to anyone who wants to take up this admittedly difficult novel for the first time. Augst’s treatment includes a lengthy discussion of my own favorite among the city scenes Melville describes: a peek into a bohemian enclave living in the attic apartments of an old abandoned church downtown. (The Melville lower Manhattan walking tour I tweeted about the other day identifies this “Church of the Apostles” as a Baptist church at 82 Nassau, which was deconsecrated in 1848 and used for commercial and residential purposes.) This is one of the earliest descriptions I know of a bohemian enclave in New York; the crowd at Pfaff’s, farther up Broadway, where Whitman was a regular, wouldn’t materialize for a few more years. Melville deliciously describes the old church’s new inhabitants, savaging its lawyers and relishing the intellectual clamor that was taking place over their heads:

[F]rom some time after its throwing open, the upper stories of the less ancient attached edifice remained almost wholly without occupants; and by the forlorn echoes of their vacuities, right over the head of the business-thriving legal gentlemen below, must — to
some few of them at least — have suggested unwelcome similitudes, having reference to the crowded state of their basement-pockets, as compared with the melancholy condition of their attics; — alas! full purses and empty heads! This dreary posture of affairs, however, was at last much altered for the better, by the gradual filling up of the vacant chambers on high, by scores of those miscellaneous, bread-and-cheese adventurers, and ambiguously professional nondescripts in very genteel but shabby black, and unaccountable foreign-looking fellows in genteel blue spectacles; who, previously issuing from unknown parts of the world, like storks in Holland, light on the eaves, and in the attics of lofty old buildings in most large sea-port towns. Here they sit and talk like magpies; or descending in quest of improbable dinners, are to be seen drawn up along the curb in front of the eating-houses, like lean rows of broken-hearted pelicans on a beach; their pockets loose, hanging down and flabby, like the pelican’s pouches when fish are hard to be caught. But these poor, penniless devils still strive to make ample amends for their physical forlornness, by resolutely reveling in the region of blissful ideals.

They are mostly artists of various sorts; painters, or sculptors, or indigent students, or teachers of languages, or poets, or fugitive French politicians, or German philosophers. Their mental tendencies, however heterodox at times, are still very fine and spiritual upon the whole; since the vacuity of their exchequers leads them to refuse the coarse materialism of Hobbes, and incline to the airy exaltations of the Berkeleyan philosophy. Often groping in vain in their pockets, they cannot but give to the Descartian vortices; while the abundance of leisure in their attics (physical and figurative), unites with the leisure in their stomachs, to fit them in an eminent degree for that undivided attention indispensable to the proper digesting of the sublimated Categories of Kant; especially as Kant (can’t) is the one great palpable fact in their pervadingly impalpable lives. These are the glorious paupers, from whom I learn the profoundest mysteries of things; since their very existence in the midst of such a terrible precariousness of the commonest means of support, affords a problem on which many speculative nut-crackers have been vainly employed. Yet let me here offer up three locks of my hair, to the memory of all such glorious paupers who have lived and died in this world. Surely, and truly I honor them — noble men often at bottom — and for that very reason I make bold to be gamesome about them; for where fundamental nobleness is, and fundamental honor is due, merriment is never accounted irreverent. The fools and pretenders of humanity, and the impostors and baboons among the gods, these only are offended with raillery; since both those gods and men whose titles to eminence are secure, seldom worry themselves about the seditious gossip of old apple-women, and the skylarkings of funny little boys in the street.

It’s hard to say what my favorite part of this description is. One thing I especially love comes near the end, where the narrator inserts himself using the first person, then aims to intrude even bodily by cutting his hair in sentimental tribute to these bohemians. The narrator in Pierre is a tricky beast, but one that any reader of the novel has to grapple with. After all, in spite of the fact that that novel led some reviewers — and family members — to doubt Melville’s sanity, the narrator famously holds his own in a sentence often used to characterize Melville himself: “I write precisely as I please.”

Illustration above from the Kraken Edition of Pierre, illustrated beautifully by Maurice Sendak.