Our third guest at last week’s Faculty Resource Network seminar was the architectural preservationist Ward Dennis, who is a member of the firm Higgins Quasebarth & Partners, which advises private, corporate, government and institutional clients on the preservation and rehabilitation of historic properties. “Denny” is also an adjunct professor in the Historic Preservation program of Columbia University’s School of Architecture. Last spring, he taught a Historic Preservation studio course that took Corlears Hook as its study area.

For Denny, change is a fact of urban life, and as a preservationist he adopts what he regards as a “curatorial” approach that can allow a city to manage the ways in which its neighborhoods change, not simply preserving buildings from the past but also finding new uses for them. He began with what might be considered the preservationist’s conundrum, using the famous Katz’s Delicatessen as an example. 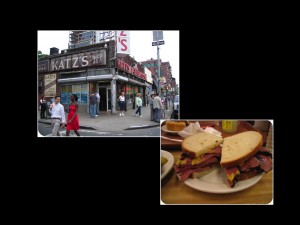 The guidebooks call Katz’s a New York landmark, but from the standpoint of the New York City Landmarks Preservation Commission, it can’t be landmarked because it isn’t architecturally distinguished. And what is it really, that you want to preserve about Katz’s? It isn’t, Denny argued, the building: it’s the pastrami sandwich — its taste and the ambiance in which you consume it. And that’s something you can’t legislate.

Katz’s signs offer evidence of another characteristic of city life that sometimes stymies preservations: the process of accretion over time. The signs were added at different times, which in fact detracts from the potential significance of the building itself. It is much more difficult to have landmark status conferred on buildings that are substantially altered over time. Change apparently diminishes architectural significance, and architectural significance is the name of the game when it comes to landmarking.

In the afternoon, he led us on a tour of the neighborhood south of Washington Square, showing us the changing architectural styles of buildings that were once tenements, pointing out features and subtle distinguishing marks that most of us don’t notice as we walk by these buildings on a daily basis. What became clear is that the idea of Greenwich village as a Bohemian space quickly became a marketing tool for developers in the early part of the twentieth century. Many buildings were renovated so that they could be more effectively represented as artists’ spaces. The tour highlighted a concept that emerged during the week as highly problematic, often evoked as a reason to resist or promote one or another kind of urban change: the idea of authenticity.

Overall, Denny offered us a highly pragmatic approach to the task of preservation, a refreshing counterweight to the nostalgia and sometimes knee-jerk resistance to change that often accompanies accounts of “lost New York.”