Last week I caught a segment on American Public Media/NPR’s Marketplace, reported by Andrea Bernstein. The topic was the movement across the country to take down old expressways in dense urban centers, let traffic disperse and congestion take care of itself, and build pedestrian-friendly parks and promenades in their places instead. Such a plan would certainly have Robert Moses rolling over in his grave, which means it’s probably a half-decent proposal. 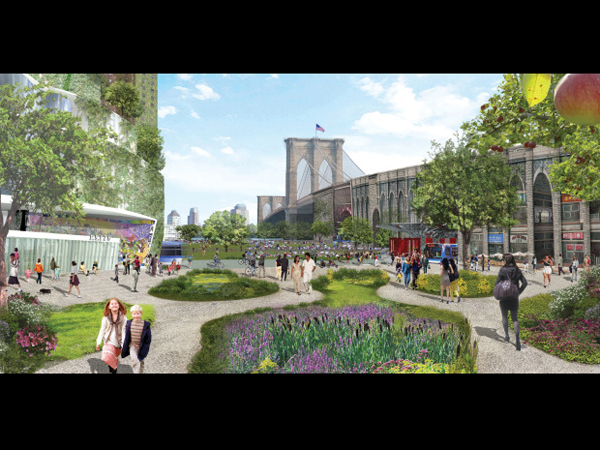 Bernstein interviewed Michael Sorkin, Distinguished Professor of Architecture and Director of the Graduate Program in Urban Design at the City College of New York, who has drawn up plans (pictured above) for what the area around Brooklyn Bridge would look like without that pesky freeway clogging everything up and rendering most of the space around the bridge a series of eyesores. For additional slides, including some takes on a similar project in Milwaukee, click here.

A clip from the transcript of the interview:

Andrea Bernstein: Near the lower tip of Manhattan, Michael Sorkin is standing just yards from the East River and Brooklyn Bridge, but you can barely see them. So he looks up.

Sorkin is an architect and head of urban design at City College of New York. He’s drawn up a different blueprint for this patch of Manhattan. Tear down a section of the elevated highway, the on-ramps and cloverleafs.

Sorkin: You would see one of the most beautiful architectural achievements in the history of consciousness, the Brooklyn Bridge.

The rest of the interview, audio and transcript, here.

What do you think? Though the rendering is a little cheesy, I’m not opposed to opening up views of the Bridge. And I was once stuck on the lower portion of the FDR, between the Brooklyn Bridge exit and the Battery, for almost two hours, with my apartment in sight the whole while. What a miserable nightmare that was. I’d almost wish the FDR gone over that incident alone.