Looking Back at the Battle of Brooklyn 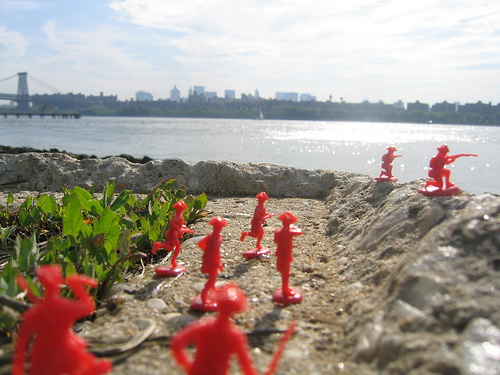 Over the last several weeks, as Cyrus and I have both been in and out of town — mostly out — and under multiple writing deadlines, we’ve let the blog languish. With luck, now that a new semester is upon us and we’ll be looking for relief from workaday woes, we’ll be back in action.

I really regretted not being able to write sooner about a recent street art installation/performance/”Happening” commemorating the Battle of Brooklyn — and raising our consciousness about the invisible but very real presence of wars, historical and contemporary, in our daily lives.

A street artist and high school art teacher living in Brooklyn, General Howe has spent the last two years installing street art that recalls New York City’s place in the American Revolution. In the most recent wave of work, he was accompanied by social networking guru and self-described Art Evangelist Kianga Ellis, who live-tweeted Howe’s progress installing miniature figurines and wheat-paste posters, rain or shine, and Jaime Rojo of the blog Brooklyn Street Art, who captured the work in breathtaking photos. I have more I’d like to write about the whole conceptual structure of the work and event, but no time now. With luck I’ll get to come back to it. Meanwhile, if you weren’t following along, you can see General Howe’s retrospective on the event at his Flickr stream; Brooklyn Street Art interviewed General Howe for the Huffington Post. For more on the Battle of Brooklyn, see the useful site for Barnet Shecter’s The Battle for New York.

All rights reserved by General Howe