Getting to Know The Drunkard 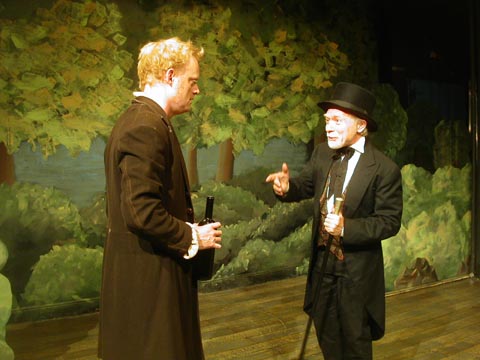 The Metropolitan Playhouse‘s tenth season is devoted to an exploration of the dynamics of stereotypes, theatrical and otherwise. This fall’s opening production, W. H. Smith’s 1844 temperance play The Drunkard; or The Fallen, Saved, makes use of theatrical stereotypes — the fallen man with the heart of gold, the sneering villain, the faithful wife, the stalwart friend and sidekick, the laughable old maid prone to malapropisms — in order to get its audience to question the validity of stereotypical thinking in the world beyond the theater.

The play’s title immediately typecasts its protagonist, whose fall into alcoholism is stipulated rather than motivated: young Edward Middleton becomes a drunkard more or less because the play requires him to become a drunkard. It isn’t a matter of growing up with alcoholic parents or any kind of childhood trauma, as far as we can tell. It isn’t a matter of an unhappy domestic situation. Edward has a convivial personality, which leads him to indulge the occasional drink, and before long he’s hiding bottles in the woods so that he can wet his whistle on the way home from the tavern. It all happens rather quickly.

The first act establishes Edward as a worthy young man, who inherits land and a cottage from his late father but refuses the entreaties of Squire Cribbs (the lawyer who is the villain of the piece) to sell the cottage for a profit. Edward doesn’t want to displace the cottage’s longtime inhabitants, Mary Wilson and her mother, who were “highly esteemed” by Edward’s father, despite the fact that they frequently had trouble paying the rent on time. Once Edward meets Mary, he falls in love with her, and at