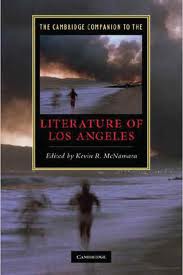 Regular readers, if we have any left at this point, will have noticed that Cyrus and I have been largely AWOL for the last several months. We’ve both been under writing deadlines and both have been on the road — Cyrus more often and on an international scale — for much of this time. We’ll be teaching Writing New York as usual in the spring, and perhaps we’ll be back on top of things here by then.

This weekend I’m in Los Angeles (Pasadena, really, or even San Marino, if you want to get picky) for a biennial conference of the Charles Brockden Brown Society. One of the first Americans to produce a significant body of fiction, Brown usually is understood as a Philadelphia writer, though he did a lot of his best known writing while living in New York, something I’ve mentioned here and written about extensively elsewhere.

But being LA has reminded me that I don’t think we’ve ever fully plugged our sister companion (sibling companion), the Cambridge Companion to the Literature of Los Angeles, edited by Kevin McNamara. It came out around the same time as our Companion to NY. Here’s the table of contents: