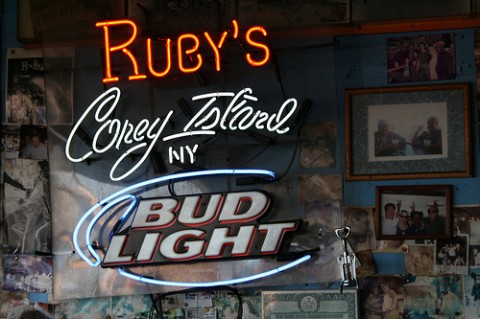 Anyone who’s ever had the good fortune to dance the night away to Ruby’s jukebox after a day at the beach will be saddened to learn — if they haven’t already heard — that Thor Equities has given the beloved boardwalk dive just two weeks to vacate. This isn’t the first time Ruby’s has had Thor’s gun to her head: a couple winters ago ugly Spaces for Lease signs went up on the storefront, though the bar was eventually able to buy some time.

The Coney Island blog Amusing the Zillion alerts readers to a November 6 rally to save Ruby’s and the other establishments facing eviction. There’s also a link there to an electronic petition to Bloomberg. As Jeremiah put it yesterday: “What’s to come? Upscale restaurants and middle-brow chains, the Xeroxed world we’re all subjected to, inured to, numbed to–and powerless to stop. Between Thor’s demolitions and Zamperla’s evictions, Coney Island is going to look like a massive car-wreck victim after multiple plastic surgeries. We won’t recognize her.” Among new businesses rumored to be circling like vultures: Shake Shack. Blech. Can anyone say Fauxny Island?