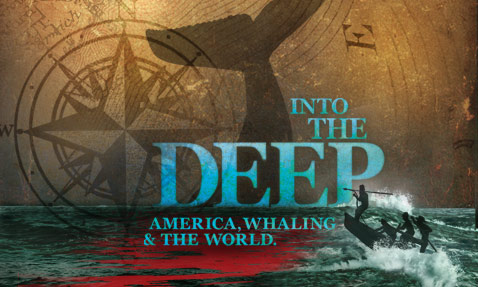 Bryan and I were pleased to host a visit by Ric Burns to NYU last night, for a special screening of his most recent documentary, Into the Deep: America, Whaling & the World. Many of our readers no doubt are familiar with Burns’s monumental, eight-part New York: A Documentary Film, and those of you who are persuaded by our arguments that Herman Melville is a central figure in the literary history of New York (and that Moby-Dick is inspired, in part, by the energies of mid-nineteenth-century New York) will find the new film illuminating as a follow-up to the earlier film.

As Burns explained in his opening remarks, Into the Deep turns on three interlinked stories: the story of the American whaling industry from its origins in the seventeenth century through its heyday in the mid-nineteenth to its sudden demise by the start of the twentieth; the story of the catastrophic voyage of the whaleship Essex, which was wrecked by a sperm whale in the Pacific Ocean 1820; and the writing and publication of Herman Melville’s Moby-Dick (1851). The film is a cautionary tale about what happens when you base an industry on a finite natural resource and suggests that the rise and fall of American whaling might be an allegory for our present-day infatuation with another natural resource — not whale oil but petroleum. At the same time, however, the film is also a case-study in globalization: for all its rapaciousness, the whaling industry also Americans to explore the wide world and come into contact with racial and cultural others — a daunting prospect for some but a source of wonder and opportunity for others, like Herman Melville.

Watching the film again, I was struck by the gorgeousness of its depictions of a whaleship under sail and the skill with which Burns staged “re-enactments.” And I realized that the film is in fact making a case for a re-evaluation of the story of American industrialization that we commonly tell ourselves, forcing us to remember the pivotal role played by whale oil and other whale products. As one of our students suggested during the question-and-answer period that followed the screening, that’s not a story that’s customarily told in high school history courses. In our historical memory, the significance of the story of American whaling has disappeared along with the industry, lost like the Essex and Melville’s Pequod.

Now small fowls flew screaming over the yet yawning gulf; a sullen white surf beat against its steep sides; then all collapsed, and the great shroud of the sea rolled on as it rolled five thousand years ago. (Moby-Dick, Chapter 135).

We were fortunate enough to be able to record the question-and-answer session, so we’ll be posting material from it in the near future. In the meantime, if you were there at the screening last night, or if you’ve seen Burns’s film and found it provocative, please leave a comment below.