The contrasts in The Contrast 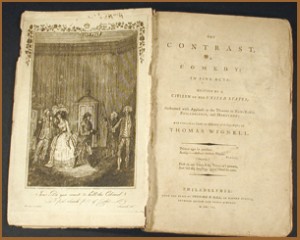 We’ve written here before about Royall Tyler’s 1787 play The Contrast, which was the first American play to be professionally staged. Set in Manhattan following the Revolution, the play takes Sheridan’s comedies of manners as a model for its send-up of New York society. I have a brief treatment of the play in my essay “The City on Stage” in our Cambridge Companion to the Literature of New York, in which I write about comparisons the play sets up between the theater and urban life, particularly in moments we would recognize as metatheatrical. (For another take on metatheatrical commentary in the play, see John Evelev’s 1996 essay in Early American Literature; institutional subscription required for that link.)

The most exemplary of the play