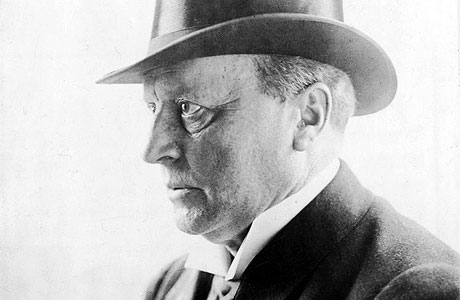 Our Writing New York class is currently reading James’s novel Washington Square. In all the years we’ve read and talked about this book, we’ve never managed to do much with James’s later piece of writing about his childhood home, “New York Revisited,” which he published in Harpers in 1906 and included the following year in his travel volume The American Scene.

In this piece James recounts a trip to the Eastern United States he undertook in 1904-05. Here’s the passage most relevant to Washington Square as a neighborhood, which follows his observation that “society” has long since made its way northward up Fifth Avenue:

One could talk of “quietness” now, for the shrinkage of life so marked, in the higher latitudes of the town, after Easter, the visible early flight of that “society” which, by the old custom, used never to budge before June or July, had almost the effect of clearing some of the streets, and indeed of suggesting that a truly clear New York might have an unsuspected charm or two to put forth. An approach to peace and harmony might have been, in a manner, promised, and the sense of other days took advantage of it to steal abroad with a ghostly tread. It kept meeting, half the time, to its discomfiture, the lamentable little Arch of Triumph which bestrides these beginnings of Washington Square — lamentable because of its poor and lonely and unsupported and unaffiliated state. With this melancholy monument it could make no terms at all, but turned its back to the strange sight as often as possible, helping itself thereby, moreover, to do a little of the pretending required, no doubt, by the fond theory that nothing hereabouts was changed. Nothing was, it could occasionally appear to me — there was no new note in the picture, not one, for instance, when I paused before a low house in a small row on the south side of Waverley Place and lived again into the queer medieval costume (preserved by the daguerreotypist’s art) of the very little boy for whom the scene had once embodied the pangs and pleasures of a dame’s small school. The dame must have been Irish, by her name, and the Irish tradition, only intensified and coarsened, seemed still to possess the place, the fact of survival, the sturdy sameness, of which arrested me, again and again, to fascination. The shabby red house, with its mere two storeys, its lowly “stoop,” its dislocated ironwork of the forties, the early fifties, the record, in its face, of blistering summers and of the long stages of the loss of self-respect, made it as consummate a morsel of the old liquor-scented, heated-looking city, the city of no pavements, but of such a plenty of politics, as I could have desired. And neighbouring Sixth Avenue, overstraddled though it might be with feats of engineering unknown to the primitive age that otherwise so persisted, wanted only, to carry off the illusion, the warm smell of the bakery on the corner of Eighth Street, a blessed repository of doughnuts, cookies, cream-cakes and pies, the slow passing by which, on returns from school, must have had much in common with the experience of the shipmen of old who came, in long voyages, while they tacked and hung back, upon those belts of ocean that are haunted with the balm and spice of tropic islands.

These were the felicities of the backward reach, which, however, had also its melancholy checks and snubs; nowhere quite so sharp as in presence, so to speak, of the rudely, the ruthlessly suppressed birth-house on the other side of the Square. That was where the pretence that nearly nothing was changed had most to come in; for a high, square, impersonal structure, proclaiming its lack of interest with a crudity all its own, so blocks, at the right moment for its own success, the view of the past, that the effect for me, in Washington Place, was of having been amputated of half my history. The grey and more or less “hallowed” University building — wasn’t it somehow, with a desperate bravery, both castellated and gabled? — has vanished from the earth, and vanished with it the two or three adjacent houses, of which the birthplace was one. This was the snub, for the complacency of retrospect, that, whereas the inner sense had positively erected there for its private contemplation a commemorative mural tablet, the very wall that should have borne this inscription had been smashed as for demonstration that tablets, in New York, are unthinkable. And I have had indeed to permit myself this free fantasy of the hypothetic rescued identity of a given house — taking the vanished number in Washington Place as most pertinent — in order to invite the reader to gasp properly with me before the fact that we not only fail to remember, in the whole length of the city, one of these frontal records of birth, sojourn, or death, under a celebrated name, but that we have only to reflect an instant to see any such form of civic piety inevitably and for ever absent. The form is cultivated, to the greatly quickened interest of street-scenery, in many of the cities of Europe; and is it not verily bitter, for those who feel a poetry in the noted passage, longer or shorter, here and there, of great lost spirits, that the institution, the profit, the glory of any such association is denied in advance to communities tending, as the phrase is, to “run” preponderantly to the sky-scraper? Where, in fact, is the point of inserting a mural tablet, at any legible height, in a building certain to be destroyed to make room for a sky-scraper? And from where, on the other hand, in a facade of fifty floors, does one “see” the pious plate recording the honour attached to one of the apartments look down on a responsive people? We have but to ask the question to recognize our necessary failure to answer it as a supremely characteristic local note — a note in the light of which the great city is projected into its future as, practically, a huge, continuous fifty-floored conspiracy against the very idea of the ancient graces, those that strike us as having flourished just in proportion as the parts of life and the signs of character have not been lumped together, not been indistinguishably sunk in the common fund of mere economic convenience. So interesting, as object-lessons, may the developments of the American gregarious ideal become; so traceable, at every turn, to the restless analyst at least, are the heavy footprints, in the finer texture of life, of a great commercial democracy seeking to abound supremely in its own sense and having none to gainsay it.

This passage can be productively read against the “topographical parenthesis” the narrator of Washington Square provides in chapter 3 of that novel.

You’ll find the rest of The American Scene here.

For a round-up of our previous posts on James’s Washington Square, start here.