In my lecture last month on Herman Melville’s story “Bartleby, the Scrivener: A Tale of Wall Street” (1853), I presented the story as a meditation on the kinds of selves that democratic urban modernity was producing in the United States in the middle of the nineteenth century and also as a diagnosis of trouble within the cosmopolitan ideal.

I generally read Moby-Dick as a dramatization of opportunities presented by a cosmopolitanism that is devoted to crossing the divides of human difference, that brings individuals together through the power of conversation conceived not only as interaction through speech but also — as Anthony Appiah puts it — “in its older meaning, of living together, association.”

In “Bartleby,” however, Melville dramatizes one of the problems that this model of cosmopolitanism faces: what happens when someone, like Bartleby, simply refuses to talk and by extension refuses to live together in association with others. The lecture suggested that one of the ills that seems to have beset democratic urban modernity is precisely the production of Bartlebys in one form or another.

As a way of investigating this idea, I proposed that there was a connection between Melville’s story and this picture, Edward Hopper’s Morning in the City (1944): 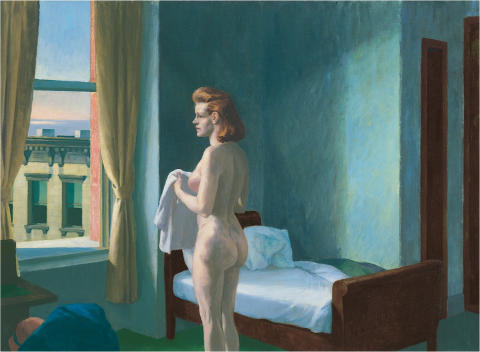 On any person who desires such queer prizes, New York will bestow the gift of loneliness and the gift of privacy. It is this largess that accounts for the presence within the city’s walls of a considerable section of the population; for the residents of Manhattan are to a large extent strangers who have pulled up stakes somewhere and come to town, seeking sanctuary or fulfillment or some greater or lesser grail. The capacity to make such dubious gifts is a mysterious quality of New York. It can destroy an individual, or it can fulfill him, depending a good deal on luck. No one should come to New York to live unless he is willing to be lucky.

I think Hopper’s paintings of the city must have been lurking in the back of White’s mind as he wrote this passage, which is the first in his book. Unlike the teeming city depicted in Whitman’s poetry, Hopper’s city is seemingly devoid of inhabitants, as in this picture from 1921, Night Shadows: 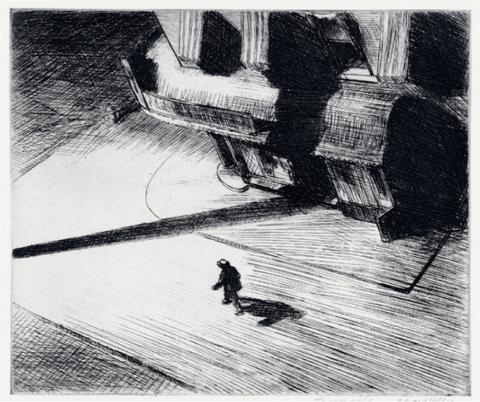 Hopper paints people who are alone, often facing away from us and therefore anonymous, people who have far more in common with White’s vision of the city than Whitman’s.

Looking at Hopper’s paintings can tell us something about the kind of experience that Melville was seeking to depict in “Bartleby.” The narrator of Melville’s story thinks he learns something from his encounter with “Bartleby,” but I’m convinced that he doesn’t: I read the story’s final line — “Ah Bartleby! Ah humanity!” — as a conventional, even theatrical gesture designed to persuade us that the narrator has experienced something like an epiphany. But the very theatricality of the gesture belies the possibility of insight. Melville’s narrator has the same relationship to the scrivener as the viewer has to one of Hopper’s paintings: forever on the outside, separated by an ontological difference that seems absolute.

I’m usually in the business of historicizing the texts that we read in Writing New York, but in this case I think the juxtaposition of these two writers and one artist yields an insight that transcends particular historical context — or perhaps that suggests that continuities between mid-nineteenth-century and mid-twentieth-century New York.