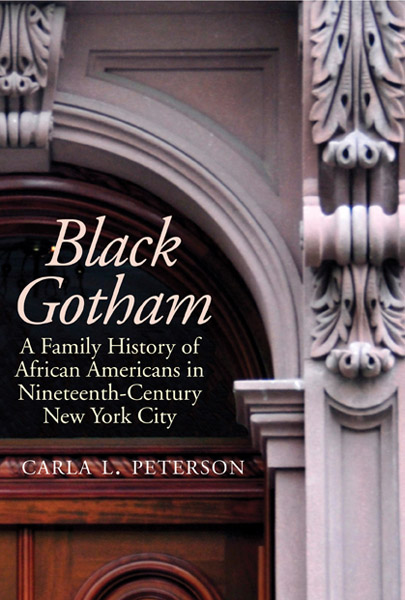 Tuesday, March 22, 5pm: A lecture celebrating the publication of Black Gotham: A Family History of African Americans in Nineteenth-Century New York City, by Carla Peterson, Professor of English at the University of Maryland, College Park. Co-sponsored by the Departments of English, History, and Social and Cultural Analysis, the Program in Archives and Public History, and the Humanities Initiative

From the publisher: Part detective tale, part social and cultural narrative, Black Gotham is Carla Peterson’s riveting account of her quest to reconstruct the lives of her nineteenth-century ancestors. As she shares their stories and those of their friends, neighbors, and business associates, she illuminates the greater history of African-American elites in New York City.

Black Gotham challenges many of the accepted “truths” about African-American history, including the assumption that the phrase “nineteenth-century black Americans” means enslaved people, that “New York state before the Civil War” refers to a place of freedom, and that a black elite did not exist until the twentieth century. Beginning her story in the 1820s, Peterson focuses on the pupils of the Mulberry Street School, the graduates of which went on to become eminent African-American leaders. She traces their political activities as well as their many achievements in trade, business, and the professions against the backdrop of the expansion of scientific racism, the trauma of the Civil War draft riots, and the rise of Jim Crow.

Told in a vivid, fast-paced style, Black Gotham is an important account of the rarely acknowledged achievements of nineteenth-century African Americans and brings to the forefront a vital yet forgotten part of American history and culture.