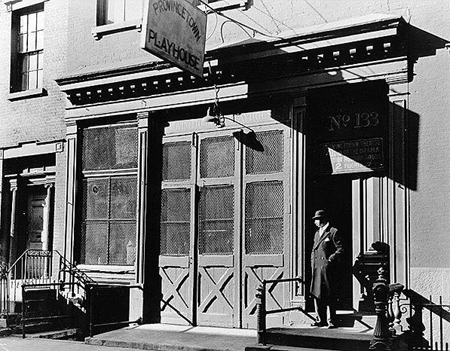 This week in Writing New York we’re still in the early twentieth century, with looks at two artistic enclaves: bohemian Greenwich Village (just before and after World War I) and the Harlem Renaissance, the subject of Cyrus’s lecture Wednesday morning.

Over the last few years we’ve pulled together some posts about the original Village bohemians that might be useful to our students or interesting to those of you who are following along at home (or arriving here via a Google image search for the Provincetown Playhouse, shown above). The main resource we’d recommend, though, is Melissa Bradshaw’s chapter on the Village in our Cambridge Companion, which our students are assigned to read this week. We can’t say enough good things about that essay and how well is anchors this unit for our course.

Previously on PWHNY, we’ve taken a look at nineteenth-century precursors to Village bohemia, including the scene at Pfaff’s, a bar at Bleecker and Broadway where Whitman hung out with the likes of the scandalous actress Adah Isaacs Mencken. The earliest description I know of a New York bohemian enclave comes slightly earlier, in Melville’s outrageous novel Pierre (1852).

Our trip through bohemian GV includes consideration of the Provincetown Players and especially Eugene O’Neill, whose play The Hairy Ape is on the syllabus. Locals will know how much buzz there’s been in the neighborhood over the demolition/reconstruction of the Provincetown Playhouse on Macdougal. (See Curbed’s archive of related stories for details.) For images of the refurbished theater, click here. Earlier this semester our friend Joe Salvatore directed a trio of Provincetown originals, embedded in an original frame narrative, to launch the space’s reopening. I’d hoped to write more about that at the time, but it obviously didn’t happen. Students who attended with me or others who saw those shows are certainly welcome to comment here.

O’Neill has popped up on this blog from time to time, including yesterday, when I mentioned Ric Burns’s documentary about the playwright and included a clip from the film that showed James O’Neill in action in The Count of Monte Cristo, circa 1913. I should have included this clip from Burns’s film, which features Christopher Plummer first discussing then performing lines from the role of James Tyrone, from O’Neill’s masterpiece, Long Day’s Journey into Night, written in 1940 but not staged until 1956. The role, of course, is based on O’Neill’s father. The really amazing stuff comes about five minutes into this clip:

A few years ago I wrote about a set of early O’Neill plays that were staged by the Metropolitan Playhouse. I’ve also tried to imagine how Emma Goldman, whose New York circles overlapped with O’Neill’s, would have reacted to his drama. She had her own bit to say in her lectures on modern drama’s significance.

Elsewhere: Don’t miss the Bowery Boys’ post about O’Neill’s favorite bohemian dive, The Golden Swan. (He just called it the “Hell Hole.”) That last link will take you to John Sloan’s visual rendering of the place; Sloan was also involved in something I mentioned briefly in lecture: the night in January 1917 when Marcel Duchamp and friends, including Sloan, climbed Washington Square Arch and declared Greenwich Village a free and independent republic. Sloan’s “Arch Conspirators” marks that occasion.

Inspired? Check out Teri Tynes’s list of 25 radical things to do in Greenwich Village, from her blog Walking Off the Big Apple.