One of the questions that I asked in today’s lecture was what we should make of this passage from the third chapter of Edith Wharton’s novel The Age of Innocence (1920):

Wandering on to the bouton d’or drawing-room (where Beaufort had had the audacity to hang “Love Victorious,” the much-discussed nude of Bouguereau) Archer found Mrs. Welland and her daughter standing near the ball-room door. Couples were already gliding over the floor beyond: the light of the wax candles fell on revolving tulle skirts, on girlish heads wreathed with modest blossoms, on the dashing aigrettes and ornaments of the young married women’s coiffures, and on the glitter of highly glazed shirt-fronts and fresh glace gloves.

The notes to the Penguin edition that we’re using (edited by Cynthia Griffin Wolff and available for Kindle) tell us that “Adolphe-William Bouguereau (1825-1905), a French painter who won the Prix de Rome in 1850, was well known for us nudes.” What they don’t tell us is what I learned from T. J. Clark many years ago in an art history class: that Bouguereau was an “Academic” painter, a traditionalist who was popular in his day and consistently exhibit in the annual Paris Salon during his career.

Bouguereau never painted a painting called Love Victorious, but it’s thought that Wharton may have had this one in mind, Le Printemps (The Return of Spring), painted in 1886 and currently on display at the Joslyn Art Museum in Omaha, Nebraska: 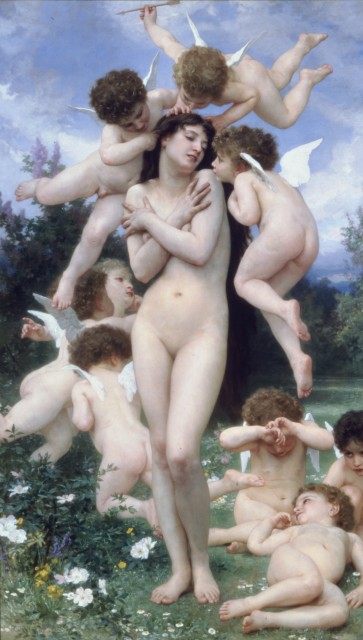 Martin Scorsese used this picture to depict “Love Victorious” in his film adaptation of The Age of Innocence. Like many of Bouguereau’s nudes, it aspires to what we would think of now as photo-realism — except for the, er, putti. I talk about this painting in class as part of a larger discussion of the novel’s relation to the idea of realism: how can a novel compete (in terms of “realism”) with forms like visual forms like painting, photography, and film?

I then compare this painting with a painting by Gustave Courbet (a “Realist” with a capital R), entitled L’Origine du Monde (The Origin of the World), painted in 1866 and currently hanging in the Mus