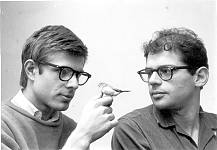 A guide to posts we’ve written in past years about Ginsberg’s Howl and the history of hipsters in New York:

In last year’s roundup post, I offered additional thoughts on some contexts I’d brought up in lecture but hadn’t explored fully: Diana Trilling’s famous reflections on her attendance at a 1959 Beat poetry reading at Columbia University, boycotted by several faculty members, including her husband, Lionel — in spite of the fact that he had been Ginsberg’s teacher. Last year’s post also includes some discussion of Norman Mailer’s “The White Negro” (also 1959), in which he defines the hipster as born from the confrontation of young white intellectuals in the Village (many of whom were raised Jewish) with black American culture. Both pieces are worth thinking about for their discussions of race and their competing desires for assimilates “whiteness” and for the freedom to cross racial lines. I suggested in that post that Mailer’s essay may be considered a forerunner of Patti Smith’s use of cross-racial fantasy in “Rock & Roll Nigger,” but it should also be seen as a forerunner of this famous photo of Smith’s contemporary, Lester Bangs.

Since then we’ve considered a variety of other Howl-related material, from Eric Drooker’s illustrated edition of the poem (drawn from his animation sequences for the recent film) to my initial take on the film itself. I also posted some thoughts about Ginsberg in relation to the intensive seminar I taught last summer, “The Downtown Scene, 1960-1980.” As part of that course we watched the early Beat film “Pull My Daisy,” and my post about it elicited comments from one of its actors, the musician David Amram. (I’m teaching that course again this May if anyone’s up for it.) 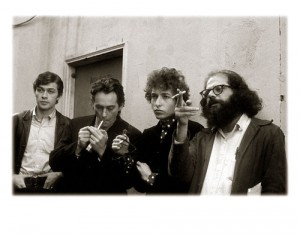 Part of our consideration of Ginsberg’s “angelheaded hipsters” (and Mailer’s “White Negro”) has included lighthearted looks at hipster history here at PWHNY. My favorite has always been our consideration of Jim Henson and Kermit the Frog’s role in this cultural formation. We’ve also noted a contemporary graffiti writer called “White Negro” take to the streets. We wish we had been able to attend this panel, which is now published as this book, which we wish we’d had the time yet to read. We’ve pondered whether contemporary Williambsburg attire is indebted to Mose and the Bowery B’hoys, but I’ve also wondered whether or not Sesame Street might have had something to do with it: