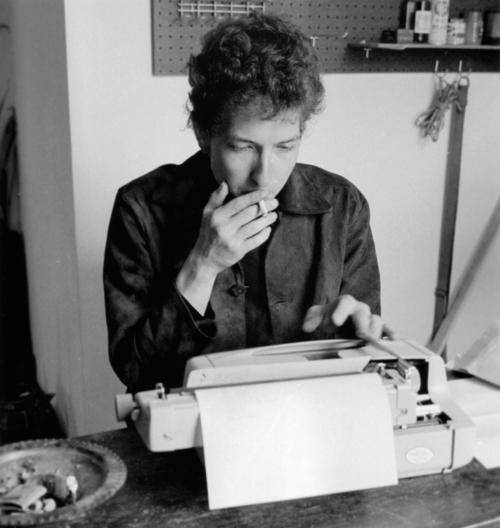 Dylan at 24, on Ginsberg’s typewriter.

Happy birthday to a great American poet. I wish I time for more than just providing a few links, but there will be no shortage of Dylan commentary today.

Here are a few Dylan-related things we’ve done over the last few years: A post noting the death of William Zantzinger; a pointer toward my thoughts on Todd Haynes’s I’m Not There. I thought I had posted about the New York Times discussion in December 1965 of whether Dylan was America’s Public writer no. 1? [subs req], but I guess I never managed to.

Some stuff on the Web and around town in honor of this auspicious occasion: Rolling Stone has a bundle of goodies, including Rob Sheffield’s list of overlooked classics; HuffPo readers are compiling their favorite tunes as a digital birthday card; Radio Free Europe is playing Dylan in multiple languages; WBAI will air 23 hours of Dylan material, including rare recordings; Film Forum is screening two classic films this week.

Plenty more to be had out there. Do you have links to suggest? The song that’s stuck in my mind for this occasion is, perhaps, a little perverse, considering it comes from Born Again Bob. But it’s a gospel gem from an underappreciated album. Since Dylan’s literally not there when you look for his music on YouTube, I’ll use Christian Bale lip-synching to John Doe’s rendition: