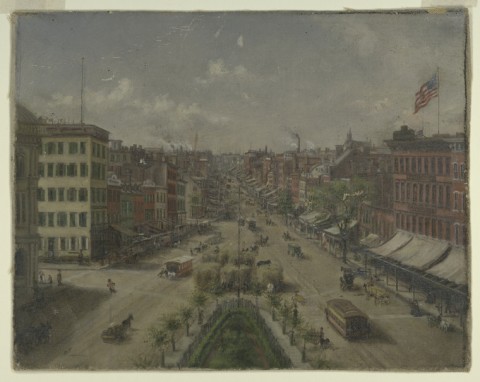 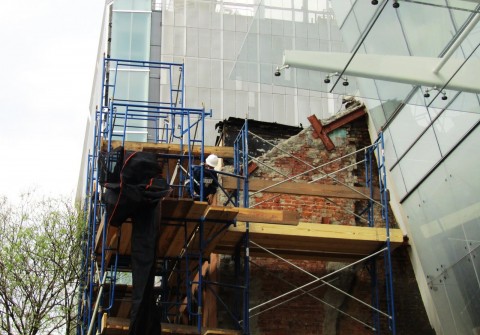 Top image (The Bowery in the 1860s, looking south from Cooper Square) via NYPL. Photo of scaffolding on 35 Cooper Sq. and final image, below, via EV Grieve.

As Grieve, Jeremiah, and Local East Village have all reported, there will be no reprieve for 35 Cooper Square, the lovely little Federal Era relic that’s a last remnant of the antebellum Bowery. (Scroll through the long and tortured saga of the building’s death warrant via Curbed’s #35coopersquare tag.)

The home was built in 1826, the same year General Lafayette made a triumphal tour of the United States to celebrate the 50th anniversary of American Independence. Think about that if you happen to walk by demolition this week.

Jeremiah wrote an appreciative history of the building back in 2008, highlighting especially its literary historical relevance in the mid 20th century as a home and hangout of Beat writers, New York School poets and painters, and jazz musicians. He quotes Diane DiPrima’s memories of her first encounter with the building:

“From the moment when I first laid eyes on 35 Cooper Square, I knew it was the fulfillment of all those fantasies of art and the artist’s life, la vie de boheme, harking all the way back to my high school years or before.”

She moved in sometime in 1962 and lived there until 1965. During those years she published the DIY literary journal The Floating Bear with the poet LeRoi Jones.

Over the last few months as preservationists have fought to save 35 Cooper Square, the general public has learned more about that building’s history than most previously knew. Responding in part to a wrong-headed opinion piece in the Local East Village, architectural historian Kerri Culhane offered the blog her own profile on the building, which is worth reading again as the walls come down. She called 35 Cooper

representative of the Bowery