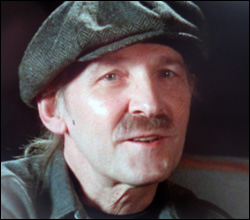 For me, one of the pleasures of reading Chronic City is something that probably drives other people batty: trying to figure out which characters, plot points, settings, and passing details have a real-world referent. I’ll have more to say, I’m sure, about how this aspect of the novel has affected my reading experience, but for now I just want to throw out a couple links for those wondering about the key character Perkus Tooth.

As Lethem acknowledged in interviews around the time of the novel’s 2009 release, Perkus has a principal prototype in the legendary critic Paul Nelson. Our friend John Mark over at Continuum called our attention to a couple titles related to Nelson: Everything Is an Afterthought, an “anthology-biography” edited by Kevin Avery and due out from Fantagraphics this fall, and Conversations with Clint, a collection of Nelson’s interviews with Eastwood, also out in October and also edited by Avery. Lethem writes the forward to the latter.

In addition to Lethem’s comments on Nelson at the first link above, readers wading into Chronic City might be interested in this collection of memorials assembled after Nelson’s 2006 death. Lethem’s represented there as well.