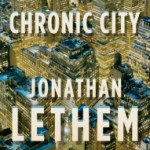 I’ll keep things shorter today, in hopes that someone might dare to get a word in.

Two moments early on in the novel were game changers for me — points at which I became less sure I knew what kind of book I was reading. One came in chapter 5, when I realized that suddenly I’d been let inside Perkus’s head, was listening to him think. In narratological terms, Lethem uses free indirect discourse to give us access to Perkus’s voice when he’s not speaking aloud. What seems jarring about this formal choice is that up to this point we’d been experiencing Chase as a first-person narrator, limited in his perspective. So how do you take this shift? Does the novel have multiple narrators, or is Chase somehow taking on the role, in moments like this, of a third-person omniscient narrator? If so, why?

The other moment came a little later, in chapter 7, when Chase gives us a beautiful, brief monologue on the view from his window. It begins this way:

I find I want to get this description right, or at least a little righter. With the possible exception of my own face in the bathroom mirror, the church spire outside my window is the sole thing I look at deliberately, consciously, every single day. Yet I glance in its direction as if in doubt, as though the spire’s memory is only a rumor between me and myself, and one of the two of us doesn’t completely trust the other. When my eyes do confirm the church’s actuality (buildings do persist, Manhattan does exist, things are relentlessly what they seem even if they serve as hosts, as homes, for other phenomena), the sight acts on my mind like an eraser rubbing away the words that might describe it, into crumbs easily swept from the page. If I’m elsewhere, I have an easy name for the thing: a church spire, a few blocks away, and, sporadically, a flock of wheeling birds. When I look, however, language dies. (124)

The paragraph that follows is, on the one hand, quite tentative about the ability of language to convey what he sees from that window. And yet this chapter is often cited as — and the view from the window serves as a recurring reminder of — Lethem’s lyricism, the vitality of his prose style. He foregrounds and even showcases clarity and descriptive power here, in spite of Chase’s insecurities about words. “Manhattan does exist”: that phrase in the middle of the paragraph anticipates and seems to refute the discussion of virtual realities that will come to dominate the novel’s closing sections. It also seems to resist the view Perkus had put forward in one of his internal rants back in chapter 5: “for who hasn’t found themselves enlisted in this city’s reigning fictions from time to time?” (74).

The issues here are the same ones I asked about yesterday: What are the relationships between personal fictions, the city’s fictions, and prose fiction (the novel as a genre, the New York novel)? What do any of these things have to do with the novel’s satirical take on virtual reality?

Let me know what you think.