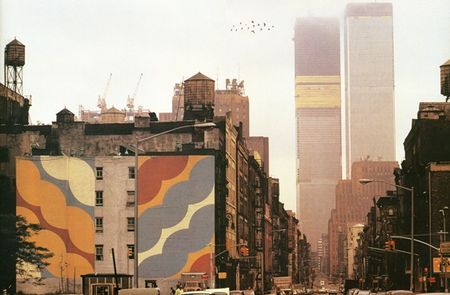 The other night I took a group of students to NYU’s Skirball Center to see a star-studded reading of Sarah Tuft’s play 110 Stories. A good chunk of the cast came from the HBO series The Wire. When I first saw it performed — I think it was in September 2003 — the cast had a liberal sprinkling of Sopranos actors. The concept — the play weaves a dozen or more first-person testimonials of 9/11 and the rescue effort — is emotionally wrenching if a little vexed in performance: the stories all come from ordinary New Yorkers but the draw (aside from fundraising for a worthy cause) is a stage full of famous people, some of whom are also New Yorkers who must have their own personal stories from that day, on hold while they read someone else’s. The two times I’ve seen 110 Stories I was there to support a friend who inadvertently wound up as one of Tuft’s character. She was “played” the first time around by Edie Falco. The other night Katie Holmes read her story.

My wife and I get a shout out at one point — and it’s kind of odd to hear Edie Falco or Katie Holmes call out your name on stage. Our friend’s story is stage-worthy largely because of a drama we initiated when we decided to take her kid from the elementary school where our daughters were also enrolled, which was a couple blocks from the World Trade Center. She hadn’t returned to pick him up for some reason and we didn’t feel comfortable leaving him behind when we evacuated. Most of the kids were already gone with parents, and we worried that if the building toppled it could crush the school. We were listed as emergency contacts, and so we told his teacher we would take him to our apartment on Water Street and meet his mother there. Our friend finally made it to the school just before the first tower collapsed. She exited through the cloud of debris, bound to find us. None of us had cell phones, and even if we’d had them they wouldn’t have worked.

Our morning on 9/11 was spent desperately trying to reunite our friend’s son with his mother. Before we could return to our apartment, the neighborhood was in lockdown and police told us to go north. The first tower collapsed while we were just above City Hall and, with tens of thousands of others, we turned and ran until we were well up Lafayette Street. We took refuge in my office at NYU and started phoning and emailing anyone we thought might be able to relay a message to her about our location. She, meanwhile, managed to talk her way through one police barricade, circumvented another by climbing a chain link fence, and made it to our apartment only to find it empty. She left us a note we discovered on the dinner table when we were finally allowed to return to our apartment over a month later.

Before we were all finally reunited, we received word by email that she somehow had learned where we were and knew that her son was safe. When she showed up at my office, covered in ash, she had a dust mask pulled up and sitting on top of her head and someone else’s blood on her shirt. She laid down on the floor outside my office, exhausted.

It still feels strange to tell that story. I first wrote it down two days later, in an account I only this week shared with our friend’s son. In that account, I mention that he and I emerged from the elementary school while jumpers were still falling from the towers, their clothes billowing like parachutes that for some reason refused to open. It’s without a doubt the most terrifying thing I’ve ever witnessed, even worse than the initial sight of the first plane soaring over my head and into the North tower only blocks away. Our friend’s son began to weep, and I lied and told him it was office furniture falling, not people.

What will he think when he reads my confession? How many times have I wondered if we did the right thing to get him out of there safely, thereby making our friend’s experience even more nightmarish than it would have been? I felt a strange detachment reading my own words last week when I opened up the file on my computer, the same sort of detachment that came while listening to Katie Holmes read my friend’s side of the story. Clearly this is a morning that continues to haunt all of us. For me, the wounds are less raw than they were at five years (“What opium is instilled into all disaster!” Emerson writes in “Experience”), but I’m much angrier than I was then: how much bloodshed, economic disaster, bigotry, and loss of civil liberties have we suffered — not just as a result of the attacks, but of our own government’s rush to war and the political legitimization of the right wing’s lunatic Tea Party fringe?

If I’m experiencing any hope on this ten year anniversary, it’s due to the resilience of the kids we were with that morning — our own, and our friend’s. Her son was on MSNBC this morning, a young college student, now much taller than I am, talking about how the events of 9/11 have made him an engaged world citizen, how they’ve compelled him to be more tolerant of different perspectives and experiences than he might have been otherwise. We’re meeting up with him and his mom in a couple hours, along with other people we spent parts of that day with, including some total strangers who opened their West Village condo to us a few hours that afternoon so we could make contact with friends and find a place to stay. We haven’t seen some of these people in ten years, but their generosity — and that of dozens of friends and family across the country who reached out to us in a time of need — has imperceptible influences on our lives every day. Thank you.

Visit msnbc.com for breaking news, world news, and news about the economy