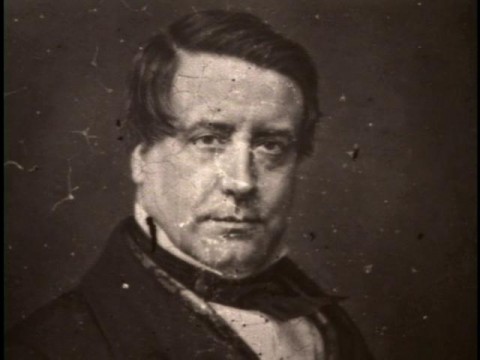 Today’s text in vWNY is Washington Irving’s A History of New York, first published in 1809. Here are something of the things that we’d like our students to be asking as they think about Irving’s book.

How does the History provide New Yorkers with a sense of the past comparable to that of other cities? How serious is it about that task? How does Irving’s ironic style work in the History and what purpose does it serve? Look, for example, at the underwhelming first words that Hudson utters when he sees New York in the first chapter of Book II of the History:

It has been traditionary in our family, that when the great navigator was first blessed with a view of this enchanting island ,he was observed, for the first and only time in his life, to exhibit strong symptoms of astonishment and admiration. He is said to have turned to master Juet, and uttered these remarkable words, while he pointed towards this paradise of the new world — “see! there!” — and thereupon, as was always his way when he was uncommonly pleased, he did puff out such clouds of dense tobacco smoke, that in one minute the vessel was out of sight of land, and master Juet was fain to wait until the winds dispersed this impenetrable fog.

Is this what we expect a major historical moment to be like?

Indeed, moments like these might prompt us to ask: In what ways is Irving appropriating the authority of the historian and transferring it over to the imaginative writer? The interested reader might look carefully at Knickerbocker’s account of the rights of colonization in Book I, Chapter 5. Many of the arguments cited there were actually by philosophers to justify invasion and colonization. Why end the chapter with the “lunar” thought experiment?

Finally, in what ways does Irving make evident an ambivalence about the connections between culture and economics that he is forced draw both in his own life and in his text? We might remember the changes in New York that Irving witnessed in the course of his lifetime, in part as a result of the Commissioners