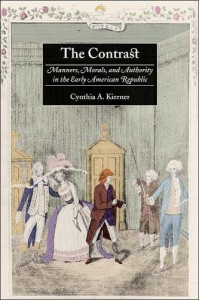 Following on yesterday’s Q&A with Alex Roe, who directed The Contrast for the Metropolitan Playhouse in 2009, today we’re happy to host a Q&A with Professor Cynthia Kierner of George Mason University, who edited the play with a substantial introductory essay for NYU Press in 2007. Professor Kierner directs GMU’s PhD program in History and Art History and is the author of Scandal At Bizarre: Rumor and Reputation in Jefferson’s America (Virginia, 2004). PWHNY: When I teach The Contrast in an American Lit survey I discuss it as dealing with post-Revolutionary American culture broadly. In Writing New York it’s a more local affair, a picture of New York staged for New Yorkers by a visiting Bostonian. How do you teach the play? CK: I first read the play in grad school, but never really thought about teaching it (or editing it) until it was one of the assigned texts for a discussion group (among high school teachers) that I was leading for a National Humanities Center Seminar in North Carolina. Although I thought that the play was really, really funny, I had never really thought that its humor would transfer to a discussion group of modern readers. It did. So, the main reason I decided to edit the play was to create an accessible edition for use in college-level courses. What fun to talk about dating and sex and shopping in a college history class! (The only online edition at that point was a real mess and not especially usable.) I have used the book as a required text in undergraduate and graduate classes on the Revolutionary era and in an undergraduate course in American women’s/gender history. In both contexts, I tend to play up the gender angles. Among other things, this play is very much about the distinctive roles of women and men — at home, in the marketplace, and in society — and how, if at all, those roles differed in a republic. I also emphasize the extent to which, even after the Revolution, the U.S. was part of an Atlantic culture. The question of how distinctive Americans were within that Atlantic world is arguably the central one in Tyler’s play. And the notion of “American exceptionalism” continues to be hotly debated, even in today’s political discourse. PWHNY: Cold War readings of the play often took for granted that Manly and Maria and Jonathan were unquestionably virtuous and the play’s heroes. Over time I’ve come to think that Tyler satirizes them as forcefully as anyone else. Does the play have characters we’re meant to embrace and emulate? I agree completely that Tyler satirizes both Manly and Maria. Despite his admirable qualities — patriotism, loyalty, respect for his parents and for women, etc. — Manly is long-winded and wears bad (and old) clothes. Arguably, his patriotism, however inspiring during the war, was not the kind that would make him an effective role model in the post-revolutionary era. (Note that George Washington, that quintessential role model, was known for his reticence and also for going back to civilian dress after the war was over). I think that Tyler is much gentler toward Maria, but she’s not perfect either. I can’t think of any single character that Tyler would have wanted his readers to emulate completely. I think that most of his characters have admirable qualities, but they also have flaws. And maybe that’s the point: Americans don’t have to be perfect as individuals to have a republic, but they do have to be sufficiently moderate and open-minded to make their experiment work. PWHNY: Charlotte’s opening anecdote about her stroll on the Battery seems to set the stage (so to speak) for a long tradition of conflating New York with the theater: the town, that is, seems to be one big performance situation. Do you think Tyler was trying to get at something he saw, as an outsider, as specific to New York, or are we being given insight into the nature of commercial society? CK: Interesting point (about conflating NY with theater). I think that for anyone whose experiences had been primarily rural — a category that would have included the vast majority of Americans ca. 1787 — any city would have struck them as “one big performance situation.” The thing that might have made New York special in 1787 would have been its new status as the capital of the United States, which made it the stage on which the nation’s leaders (and prominent New Yorkers) enacted official and quasi-official rituals as they constructed the public culture of the republic. Philadelphia occupied this position both before and after New York’s brief stint as the center of government. (Note that NY was not the largest city in the U.S. at that time, nor was it the one with the most significant theater history.) PWHNY: What do you think The Contrast has to teach us today? CK: My students are really interested to learn that theater was so controversial — that people regarded the stage variously as a source of corruption and a source of education. Does that make theater the “new media” of late eighteenth-century America? On an even more basic level, by including characters from so many different ethnic backgrounds, Tyler’s portrait of New York teaches readers that the city — and, by extension, the United States — was born diverse, and that contemporaries saw diversity as an important aspect of their society. That’s a crucial insight and a useful counterpoint to those who would see the story revolutionary era as a top-down founders-focused sort of history. PWHNY: Thanks for this conversation!