The city on stage 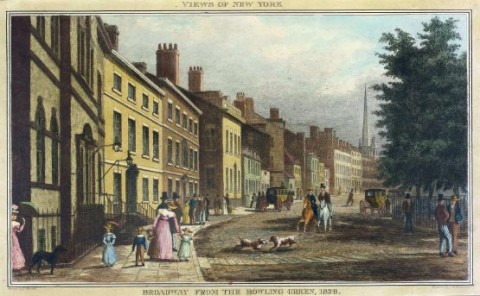 Cyrus’s discussion of Irving’s History over the last week or so lays the foundation for one of the big trajectories we trace in Writing New York: the idea of constructed histories — the literariness of the city’s history — and the very real effects those histories have had on the city’s development over time. (Elizabeth Bradley’s Knickerbocker is also instructive in this regard.)

The material I’m taking up over the next few weeks for #vWNY gets at another of our big issues: the way so much writing, especially over the course of the nineteenth century, channels anxieties about the theatricality of everyday urban life. The plays that we teach in this unit share preoccupations with fashion, manners, and the distance between public and private selves. They also fixate on the fluidity of social class. These issues aren’t unique to New York writing, of course, but they do seem to have played into the city’s reputation and self-conception for a very long time.

In lecture I use this bit from Luc Sante’s Low Life as a starting point:

Manhattan was a theater from the first. When, early on, it was a walled city, and further surrounded by a forest of masts, it enclosed in its ring a small universe. This enclosure is the model of cities as it is of theaters, as can be seen when one compares old representations of fortress cities and of Greek amphitheaters and later theaters like the Globe. In Manhattan, social stratification followed a course in which the waterfront and the area environs near it became undesirable, became like the galleries [in theaters], which the dead center, Fifth Avenue, would be the orchestra stalls. What, then, would be the stage? There are two answers. One of them in contained in the image of the city as a theater, consisting of rings, loge, and parquet, in which . . . the audience is the object of its own contemplation. Manhattan has eternally been fascinated by itself. . . . The other answer has to do
with the street that runs diagonally up the island — Broadway — putting itself on display and carrying in its train its dark twin, the Bowery.

Sante’s attention to lower Broadway (and, later, the Bowery) as a space of social performance anticipates the opening scene of Tyler’s play, in which Charlotte recounts for a friend her adventures walking on the Battery for an audience of soldiers and beaux. In our post-Erving Goffman world, the idea that we perform our way through everyday life is practically taken for granted. In Tyler’s day it was one of the reason some social conservatives distrusted theater: because it lent to the theatricalization of ordinary social exchanges. If everyone’s performing, whom can you trust?

The easy answer, on many reading’s of Tyler’s play, is that you need to trust Colonel Manly — a sentimental patriot, dressed in homespun, throwing off the trappings of England and celebrating his country’s native virtues (including Maria, the sentimental heroine). But I’m pretty sure Tyler isn’t letting these characters off the hook so easy. When we talk about the contrasts in The Contrast it usually involves making a list that goes something like this:

But, as I try to make the case in lecture (and in my chapter of the Cambridge Companion), I think one additional contrast undoes some of these others — the contrast between inexperienced theater-goers (especially Jonathan, the Yankee rube, who thinks he’s peeping in on the neighbors when he’s watching a play) and more sophisticated consumers of plays, including, we presume, this play’s target audience. By aligning himself with the theater, Tyler walks a thin line, and in some contemporaries’ minds probably fell over that line and landed flat on his face. It’s hard to take the play’s moralizing at face value when it’s thrown in its lot with a form so inimical to republican virtue. (Others, including George Washington, didn’t share these conservative qualms.)

Tyler’s play seems (inadvertently?) to expose Manly and Maria’s sentimentalism as so much show. Does it expect us to find a way to step outside our everyday performances? Or are we simply supposed to be more honest in recognizing the ways we act, in naming the performances from which the city won’t let us escape?