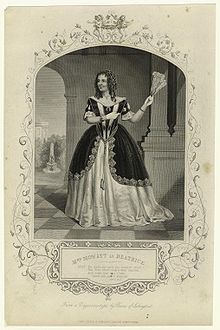 In the epilogue to Anna Cora Mowatt’s comedy Fashion (1845) — modeled, as Edgar Allan Poe pointed out in an early review, on Sheridan’s plays — one character expresses her hope that Fashion will become fashionable. The play’s republican hero, an overprotective grandfather, reiterates his distrust of fashion, and yet another character, the heroine, concludes by asking the audience both to show mercy on the performers and to give them “your honest verdict,” which will allow them to “learn to prize at its just value — Fashion.”

All the punning on Fashion/fashion seems to betray not only an anxiety about the status of fashion in the antebellum city but about the reception of Mowatt’s play. As it turns out, Mowatt had a hit, which eventually opened the door for her to take the stage as a professional actress. If her play seems awfully like Tyler’s The Contrast in its Sheridean debts, there does seem to me to be less equivocating about its accommodation of fashion. Mowatt’s republican mouthpiece is now a grandfather rather than a bachelor hero, and the heroine’s concluding speech doesn’t reject fashion so much as accommodate it. For Mowatt, the nouveaux riches pose the biggest danger, because they overvalue fashion and seek to use it as part of their scramble for upward mobility. If you value fashion (and Fashion) justly, by contrast, you must be part of that natural nobility Trueman was always blathering about.

There’s much more to be said here than I have time to write about today, but it’s worth noting how performances of age, race, and gender play into this discussion of fashion — and performances of authorship as well. That’s the angle Poe took up when he wrote about Mowatt in his essay series “The Literati of New York.” He begins:

Mrs. Mowatt is in some respects a remarkable woman, and has undoubtedly wrought a deeper impression upon the public than any one of her sex in America.

She became first known through her recitations.