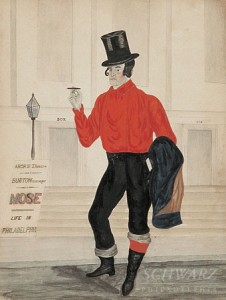 Today’s reading for vWNY is Benjamin Baker’s 1848 play A Glance at New York, best known for introducing NYC’s homegrown folk hero, Mose the Bowery B’hoy, to the American stage. The full text doesn’t seem to be available online, but you can find it anthologized here, with used copies going pretty cheap.

If you were reading along for George Foster’s New York by Gas-Light, you encountered the hero of Baker’s play in Foster’s chapter “Mose and Lize.” Writing just two years after the Bowery actor Frank Chanfrau first played Mose in Baker’s play, Foster, who wasn’t always fond of working-class culture, described Mose as, like Davy Crockett, the end-point of “free development to Anglo-Saxon nature.” He gives the b’hoys props for manning the city’s Fire Department:

Yonder we see [a b’hoy] standing fearlessly upon the very verge of a five-story roof, chopping deliberately away at some wooden spout it is desirable to sever, while the treacherous flames crawl like fiery serpents out at the window-casing, down the shingles, and at length grown bolder, come to lick his very feet. So absorbed is he in his perilous occupation that he has not heard the cries of warning which the crowd below have been sending up through the smoky din of the conflagration. In a moment more the roof is all on fire, the air has lost its last particle of vitality and can no more be breathed. Too late he discovers his peril; and, blinded by smoke, suffocated and choking with the hot air, he strikes out at random for the window whence he issued, now framed with glowing flame. For a moment his heart sinks, as he sees before him his horrible but inevitable fate. But in another he rallies — recalls the half-remembered fragments of a prayer his mother taught him, long, long ago — sends a look, a kiss and a blessing after “Lize,” who perhaps even then is dreaming of him in her tidy little garret bed-room — and disappears forever.

We’ve built up a stockpile of posts about Mose and Glance and Bowery b’hoys over the years. (See links below.) For more, visit The Bowery Culture Archive, part of CUNY’s Lost Museum online exhibit. Also check out this blog post from NYC I SEE, which speculates that Mose may have been a prototype for Superman. Not sure what we think of that theory, but it’s a fun read nonetheless. Is there room in New York for a Mose revival? The Axis Company staged revivals of Baker’s play in 2003 and 2007. (We missed them, sadly.) And Magic Tree House author Mary Pope Osborne retells his story for 21st-century children in New York’s Bravest.