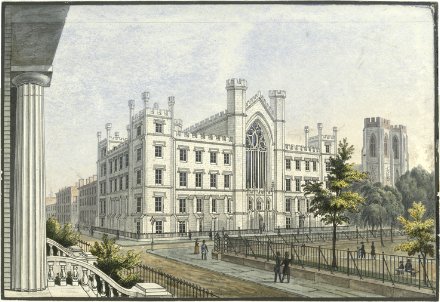 In Theodore Winthrop’s novel Cecil Dreeme, Washington Square is rechristened “Ailanthus Square,” and NYU makes its appearance as “Chrysalis College.” The name is apt: in 1862, when Winthrop published his novel, the university was only 31 years old and still in its infancy, still a chrysalis, not yet the butterfly that it aspired to become.

And it did have big aspirations, which the novel gently mocks. Our narrator, Robert Byng, has decided to accept his friend Harry Stillfleet’s invitation to borrow his digs in the Chrysalis College’s Gothic building while Stillfleet is out of the country.:

“There I live,” said [Stillfleet]. “It’s not a jail, as you might suppose from its grimmish aspect. Not an Asylum. Not a Retreat. No lunatics, that I know of, kept there, nor anything, mysterious, or out of the way.”

“Chrysalis College, is it not?”

“You have not forgotten its monastic phiz?”

“No; I remember the sham convent, sham castle, modern-antique affair. But how do you happen to be quartered there? Is the College defunct?”

“Well, and what was the result?”

“The result is, that the old nickname of Chrysalis sticks to it, and whatever real name it may have is forgotten. There it stands, big, battlemented, buttressed, marble, with windows like crenelles; and inside they keep up the traditional methods of education.”

“But pupils don’t beleaguer it?”

“That is the blunt fact. It stays an ineffectual high-low school. The halls and lecture-rooms would stand vacant, so they let them to lodgers.”

“You are not very grateful to your landlords.”

“I pay my rent, and have a right to criticize.”

“Who lives there besides you?”

“Several artists, a brace of young doctors, one or two quiet men about town, Churm, and myself.”

The novel reminds us that NYU was part of the artistic culture of Greenwich Village from close to its beginnings, that its Gothic main building was at least in part a Bohemian space. The Gothic building was replaced in 1892 by the present structure, first called Main Building, recently renamed Silver Center.

Of course, Stillfleet’s comment — “No lunatics, that I know of, kept there, nor anything, mysterious, or out of the way.” — proves, by the novel’s end, to be deeply ironic. But the description of NYU as an “ineffectual high-low school” cuts pretty close to home — arguably, it was an apt description of NYU when I arrived in 1993. Now, I’d argue, NYU has metamorphosed into something else, and I fully expect that in its incarnation as a “global network university,” it will finally emerge from its chrysalis and become the butterfly it has always wanted to be. But we might keep in mind Winthrop’s comments about the building “roomy”: just building it isn’t enough. A cautionary tale, from one century to another.