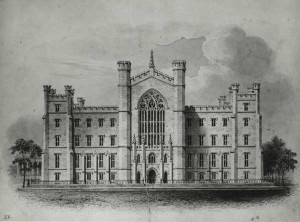 Greetings to all vWNYers from the pink city of Jaipur in the state of Rajasthan in India. My family and I are spending NYUAD’s Eid al-Adha break in India. Sorry for missing m post last Wednesday when we were on our way to Delhi. I’ll do a make-up at some point.

Meanwhile, it’s very odd to be thinking about Theodore Winthrop’s (1862) novel Cecil Dreeme while I’m nine-and-half time zones away from New York, because it’s always seemed to me to be such a local novel. Such an NYU novel. It’s set, after all, in a lightly fictionalized version of Washington Square. Winthrop calls it “Ailanthus Square,” because Of the ailanthus trees planted there. Henry James refers to the tree in one of our favorite paragraphs from his novel Washington Square (1880), which we will be reading later in the term: The ideal of quiet and of genteel retirement, in 1835, was found in Washington Square, where the doctor built himself a handsome, modern, wide-fronted house, with a big balcony before the drawing-room windows, and a flight of white marble steps ascending to a portal which was also faced with white marble. This structure, and many of its neighbours, which it exactly resembled, were supposed, forty years ago, to embody the last results of architectural science, and they remain to this day very solid and honourable dwellings. In front of them was the square, containing a considerable quantity of inexpensive vegetation, enclosed by a wooden paling, which increased its rural and accessible appearance; and round the corner was the more august precinct of the Fifth Avenue, taking its origin at this point with a spacious and confident air which already marked it for high destinies. I know not whether it is owing to the tenderness of early associations, but this portion of New York appears to many persons the most delectable. It has a kind of established repose which is not of frequent occurrence in other quarters of the long, shrill city; it has a riper, richer, more honourable look than any of the upper ramifications of the great longitudinal thoroughfare