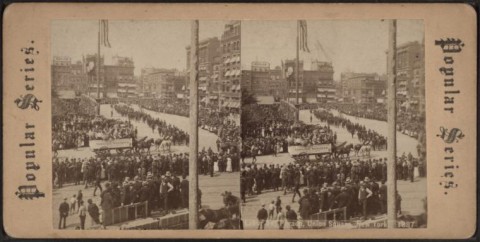 As you know, Labor Day is a federal holiday in the USA, which is traditionally regarded as the final day of summer and (in some circles) the last day on which you can tastefully wear either white or seersucker. The day is meant to celebrate the contributions made by workers to America’s economic and social well-being and was first celebrated as a public holiday by the state of Oregon in 1887. It became a federal holiday in 1894.

Labor Day, 1887 happens to be the day on which the picture above (from the New York Public Library’s Digital Gallery) was taken. The picture depicts the Fireman’s Parade in Union Square, the frequent site of labor rallies over the years. The first Labor Day celebration in New York took place in the square 5 years earlier when a parade of more than 10,000 workers marched up Broadway and past a reviewing stand in Union Square.

Contrary to popular belief, however, the name of the square has nothing to do with the labor movement (or with the Union army or the federal Union). It was named, as the NYC Parks Department website reminds us, for “its location at the intersection