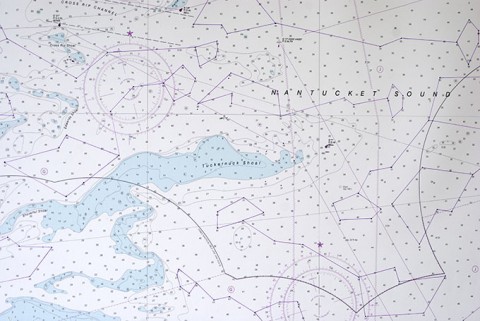 In today’s brief chapter (under five minutes), our heroes arrive at the legendary whaling island of Nantucket,

Nantucket! Take out your map and look at it. See what a real corner of the world it occupies; how it stands there, away off shore, more lonely than the Eddystone lighthouse. Look at it — a mere hillock, and elbow of sand; all beach, without a background. There is more sand there than you would use in twenty years as a substitute for blotting paper. Some gamesome wights will tell you that they have to plant weeds there, they don’t grow naturally; that they import Canada thistles; that they have to send beyond seas for a spile to stop a leak in an oil cask; that pieces of wood in Nantucket are carried about like bits of the true cross in Rome; that people there plant toadstools before their houses, to get under the shade in summer time; that one blade of grass makes an oasis, three blades in a day’s walk a prairie; that they wear quicksand shoes, something like Laplander snowshoes; that they are so shut up, belted about, every way inclosed, surrounded, and made an utter island of by the ocean, that to their very chairs and tables small clams will sometimes be found adhering, as to the backs of sea turtles. But these extravaganzas only show that Nantucket is no Illinois.

In Ric Burns’s riveting documentary Into the Deep: America, Whaling & the World (2010), today’s reader Nathaniel Philbrick describes the heroism of the Nantucket whalers:

One of these ships could sail up to a Pacific atoll