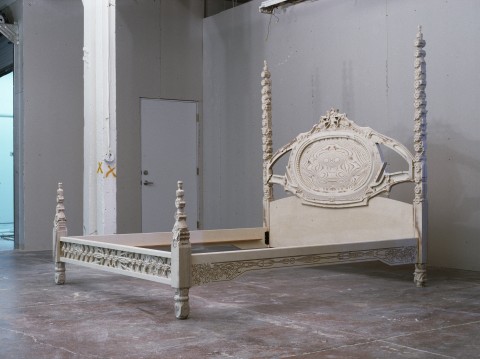 An American joins the crew! Today’s chapter, “The Counterpane,” is read by Caleb Crain, who wrote the chapter entitled “The Early Literature of New York’s Moneyed Class” for Bryan’s and my Cambridge Companion to the Literature of New York City. Caleb is a contributor to the New Yorker and is the author of a wonderful monograph on the portrayal of friendship in nineteenth-century US literature, American Sympathy: Men, Friendship, and Literature in the New Nation. It’s appropriate, therefore, that he read the chapter in which the friendship between Ishmael and Queequeg begins to take root.

“The Counterpane” opens with Ishmael waking to find “Queequeg’s arm thrown over me in the most loving and affectionate manner.” The chapter continues to explore the idea of cosmopolitan toleration with which the previous chapter concludes. Somewhat hurriedly, perhaps, Ishmael rationalized his situation (sharing a bed with a cannibal harpooner):

“You gettee in,” [Queequeg] added, motioning to me with his tomahawk, and throwing the clothes to one side. He really did this in not only a civil but a really kind and charitable way. I stood looking at him a moment. For all his tattooings he was on the whole a clean, comely looking cannibal. What’s all this fuss I have been making about, thought I to myself — the man’s a human being just as I am: he has just as much reason to fear me, as I have to be afraid of him. Better sleep with a sober cannibal than a drunken Christian.

The chapter suggests, however, that Ishmael may have more qualms than he’s letting on. In addition to some vaguely Orientalist, slightly patronizing language about “these savages,” Ishmael tells a strange Gothic-tinged anecdote about sleeping in a strange bed when he was a boy:

For several hours I lay there broad awake, feeling a great deal worse than I have ever done since, even from the greatest subsequent misfortunes. At last I must have fallen into a troubled nightmare of a doze; and slowly waking from it — half steeped in dreams — I opened my eyes, and the before sun-lit room was now wrapped in outer darkness. Instantly I felt a shock running through all my frame; nothing was to be seen, and nothing was to be heard; but a supernatural hand seemed placed in mine. My arm hung over the counterpane, and the nameless, unimaginable, silent form or phantom, to which the hand belonged, seemed closely seated by my bedside. For what seemed ages piled on ages, I lay there, frozen with the most awful fears, not daring to drag away my hand; yet ever thinking that if I could but stir it one single inch, the horrid spell would be broken. I knew not how this consciousness at last glided away from me; but waking in the morning, I shudderingly remembered it all, and for days and weeks and months afterwards I lost myself in confounding attempts to explain the mystery. Nay, to this very hour, I often puzzle myself with it.

Signs of an unsettled subconscious, perhaps?

The chapter concludes with an account of Queequeg’s toilet and concludes as we watch as the harpooner “proudly marched out of the room, wrapped up in his great pilot monkey jacket, and sporting his harpoon like a marshal’s baton.”

The illustration for today is appropriately layered, given the subject of the chapter. It’s a photo by Zen Sekizawa of a bed by Pae White courtesy of courtesy of the gallery neugerriemschneider in Berlin. The title of the object is California King (2006; 83 inches tall x 78 inches wide x 88 inches deep; material: Baltic birch plywood). Visit the site for a higher resolution image.