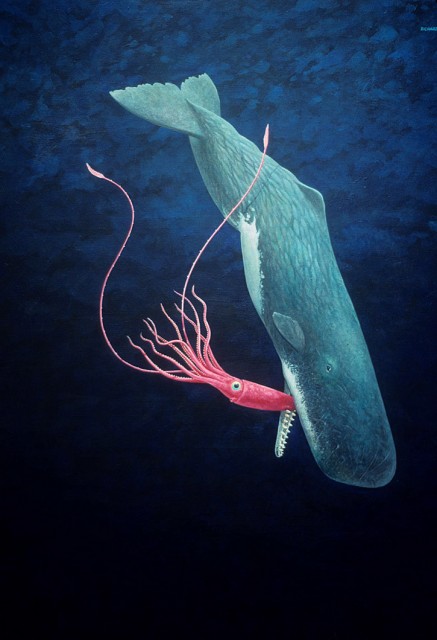 The large whale that Stubb killed has been laboriously towed by the mates’ whaleboats back to the Pequod; Ahab has retreated to his cabin, unhappy (Ishmael thinks) “as if the sight of that dead body reminded him that Moby Dick was yet to be slain; and though a thousand other whales were brought to his ship, all that would not one jot advance his grand, monomaniac object: and “staid Starbuck” has left the “management of affairs” on deck to the extulant Stubb.

And what spoils does the conquering hero desire? Why a piece of whale steak, cut from the “small” of the whale (the tapering extremity of the body,” according to Ishmael). Whale steak isn’t actually a favored delicacy among whalemen, it turns out, but Stubb can’t seem to get enough of it. Just like the sharks, who swarmed the Pequod‘ side during the night, taking bites out of the whale’s corpse.

In this chapter, one of the most amusing and disturbing in the novel, Ishmael manages to sound a number of themes that he plays at various intervals throughout the book:

At the end of the chapter, like a Chaucerian fabliau or a classic Seinfeld episode, it all comes together in Fleece’s muttered response to Stubb’s demand for a breakfast of “whale-balls” the next morning:

“Wish, by gor! whale eat him, ‘stead of him eat whale. I’m bressed if he ain’t more of shark dan Massa Shark hisself,” muttered the old man, limping away; with which sage ejaculation he went to his hammock.

Stubb’s Supper” is read by renowned UK seafood restaurateur Rick Stein and illustrated with the painting Red Squid by Richard Ellis. Although the illustration might, at first, seem more appropriate for the chapter entitled “Squid” (though the great squid described there is white), the painting does capture the brutality of the sea that is one of Ishmael’s subjects in this chapter.