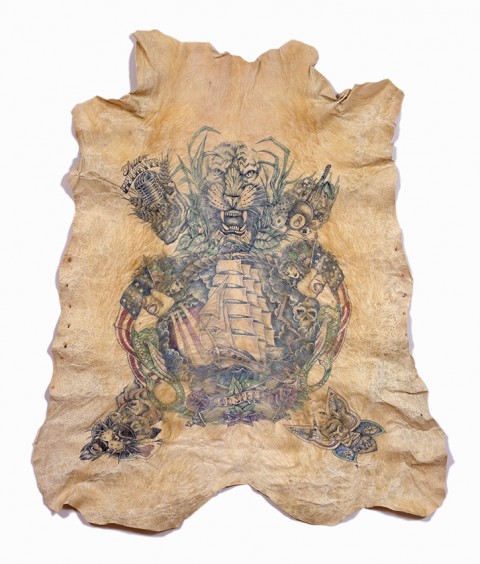 The full title of this chapter is “Leg and Arm – The Pequod, of Nantucket, meets the Samuel Enderby, of London,” indicating that what we have is another gam chapter. Both of the appendages in question are actually missing: the title refers to Ahab’s missing leg and the missing arm of the Enderby‘s captain, the latter lost as the result of an encounter with none other than Moby Dick. This is one gam in which Ahab takes a direct interest, so much so, that he consents to being lifted over to the other ship via one of its cutting-tackles.

Captain Boomer spins his yarn, revealing how Moby Dick freed a pod of whales that had been made fast by the Enderby, then split the captain’s boat in two, resulting in the captains being caught in the arm by a harpoon iron, which tears itself free, saving the captain bfrom being drowned but creating what the ship’s surgeon, Dr. Bunger, calls “as ugly gaping wound as surgeon ever saw.” Boomer twice crosses paths with the white whale afterward, but refuses to engage: “ain’t one limb enough.”

Bunger, however, reveals a fact about the whale’s anatomy that would seem to support Starbuck’s belief that Moby Dick struck Ahab from “blindest instinct” rather than intention. According to Bunger, Boomer might well be able to retrieve his lost arm from the whale’s innards:

“the digestive organs of the whale are so inscrutably constructed by Divine Providence, man’s arm? And he knows it too. So that what you take for the White Whale’s malice is only his awkwardness. For he never means to swallow a single limb; he only thinks to terrify by feints. But sometimes he is like the old juggling fellow, formerly a patient of mine in Ceylon, that making believe swallow jack- knives, once upon a time let one drop into him in good earnest, and there it stayed for a twelvemonth or more; when I gave him an emetic, and he heaved it up in small tacks, d’ye see. No possible way for him to digest that jack-knife, and fully incorporate it into his general bodily system. Yes, Captain Boomer, if you are quick enough about it, and have a mind to pawn one arm for the sake of the privilege of giving decent burial to the other, why in that case the arm is yours; only let the whale have another chance at you shortly, that’s all.”

Providence, in other words, has a role to play in the life of the white whale, but not the role to which Ahab has assigned it. It made the whale and then let it loose. That’s it.

Ahab suddenly seems to lose all respect for Boomer, after the latter suggests that Moby Dick might well be “best let alone.” Bunger notes that Ahab’s blood seems literally to be “at the boiling point! — his pulse makes these planks beat.” As soon as Boomer tells the enraged Ahab that the whale has headed east, Ahab quits the Enderby, returning to the Pequod, with his back to the stranger ship. End of gam. Ahab will brook no counter-argument apparently. But that shouldn’t surprise us at this late date.

“Leg and Arm” is read by Erica Wagner, who is the literary editor of The Times. The illustration, True Believer, is by Belgian artist Wim Delvoye.