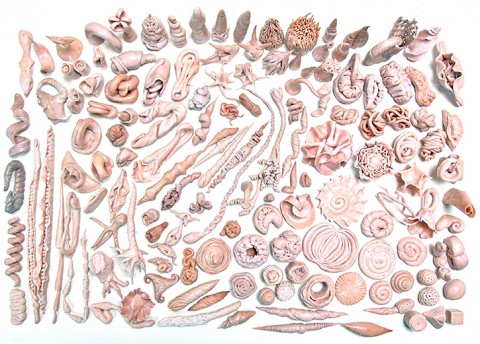 In “The Fossil Whale,” Ishmael continues to think about the task he has undertaken: to write a book that does justice to whales and whaling. “To produce a mighty book,” he declares, “you must choose a mighty theme. No great and enduring volume can ever be written on the flea, though many there be who have tried it.” Ishmael jokes that the job requires big words and thus a big dictionary, in his case “a huge quarto edition of Johnson.” It’s a bonus that Johnson himself possessed “uncommon personal bulk.”

Shall we discuss “penmanship”? Bah. Use “chirography” instead! And let’s make liberal use of hyperbole: “Give me a condor’s quill! Give me Vesuvius’ crater for an inkstand!”

Having spent a lot of time on the present condition of the whale and its hunters, Ishmael now turns to the past, describing prehistoric (“pre-adamite”) whales (and making liberal use of volume 27 of the Penny Cyclopedia). He ends the chapter with a quote from a famous medieval cosmopolitan, Al-Hasan ibn Muhammad al-Wazzan al-Fasi, known more popularly in Europe as “Leo Africanus.” Ishmael calls him “the venerable John Leo, the old Barbary traveller” and quotes from his