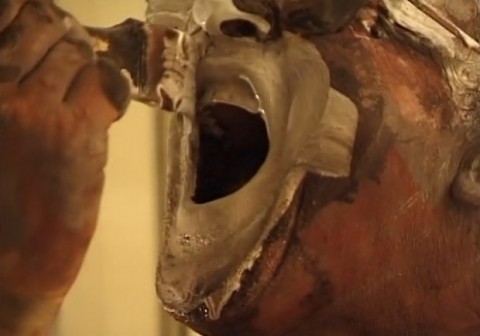 This chapter provides further evidence of Ahab’s superstitious nature and gives the Pequod’s mates an opportunity to think about their surprise shipmate, Fedallah. Ahab has given permission for the crew to capture a right whale because (as Flask reports) Fedallah has proclaimed “that the ship which but once has a Sperm Whale’s head hoisted on her starboard side, and at the same time a Right Whale’s on the larboard . . . can never afterwards capsize?'” Fedallah, Flask reports, “seems to know all about ships’ charms.”

Stubb, however, is unconvinced and, moreover, promises to pitch Fedallah overboard if the opportunity presents itself, because he believes “Fedallah to be the devil in disguise. . . . The reason why you don’t see his tail, is because he tucks it up out of sight.”